The Hopper is a vehicle manufactured for the Stone Army. One was the personal vehicle of General Kozu.

After watching the Ninja escape from his camp, Garmadon orders the Stone Army to catch the Ninja. They get away in the Earth Driller and are pursued by a hopper and some warrior bikes. Kozu pursued the Ninja along the coast, but Cole turned the driller around, charged at the hopper, went up a ramp, then drilled into the ground under the hopper. Kozu screamed with anger and the hopper stomped on the ground several times. Once the Stone Army caught up to the Ninja, Kai destroyed some warrior bikes and the hopper put out the fire. It then pursued the Ninja up the mountain, but Kai caused a landslide and stopped the chase.

To combat the Ninja's new powers, Kozu steps up the Stone Army's defenses and presents Garmadon with two new Hoppers and a Tusk. Later, the Ninja arrive and steal the Helmet of Shadows. Kozu pursues them underground in a hopper, ramming it into the back of the Earth Driller. After the Ninja reached the Celestial Clock, Kozu arrived on a hopper along with some Warrior Bikes to stop them and succeeded.

The Stone Army travelled to the edge of the Dark Island with the Garmatron and their other vehicles to fire dark matter at Ninjago Island. When the ninja arrived, Kai split the Hopper in half with his Elemental Blade, destroying it. 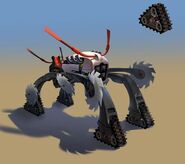 Putting out a fire

Add a photo to this gallery
Retrieved from "https://ninjago.fandom.com/wiki/Hopper?oldid=474502"
Community content is available under CC-BY-SA unless otherwise noted.