Deceased
Ghost Ninja Howla was a Ghost Ninja. He was one of the ghosts summoned by Morro. He arrived with the Preeminent and died with its destruction.

Note: Due to all Ghost Warriors being identical in appearance, it is impossible to determine who is who in the television series. As such, any appearances of a ghost warrior will be cataloged here, regardless if they are in fact Howla. 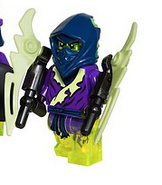