Ninjago Wiki
Register
Don't have an account?
Sign In
Advertisement
in: Magazine, Ninjago: Masters of Spinjitzu, The Island, 2021

Not to be confused with the season.

“Watch your step, this jungle is dangerous!”
— Kai to Nya

Hunted! is the 76th issue of the Ninjago Magazine. It includes 892176 Thunder Keeper (a Thunder Keeper minifigure with a lightning staff and handcuffs) and Kai and Cole appear on the cover. The comic, Motors vs. Dragons, is written by Jan Dinter.

The Ninja, minus Lloyd, traipse through the jungle wondering if the green ninja and Twitchy Tim managed to escape the Stone Guardians. Kai highlights that they have to keep their attention on the dangers of the jungle they’re walking through. Nya points out he needs to follow his own advice, as Jay, Cole and himself had stepped into quicksand. Nya looks around for a long branch, but Zane instead opts for using his Ice power to make a bridge to allow Nya to grab the three trapped ninja and pull them out. They carry on, but it isn’t long before Jay is attacked by a large Venus fly trap plant. The others use their elemental powers together to free him, but the energy from the island is protecting the plant from their power. Cole makes the plan to use Earth to attack the roots of the plant instead. This plan works and Jay is spat out.

The ninja find a clearing in the jungle, but find that its the same spot they left the Jungle Choppers, meaning they’ve gone in a circle. Jay leans against, what he thinks is, a rock. It turns out to be a Jungle Dragon that had camouflaged as the mountain. Nya remembers Zippy and she deduces that it could be Zippy's uncle. She remembers how much he wanted to play and assumes he is the same. She was wrong and the dragon goes to attack the ninja. They use their elemental powers on the dragon, but he uses his tail draw on the storm to form a shield around him. Jay tries to use Spinjitzu, but he is swatted away. Zane suggests they retreat instead. They find a small canyon to escape into.

They find that there’s no exit and that they are being cornered. Just as they feel doomed, Zippy’s uncle scampers away. The ninja are confused, until they see that they had been led into a nest with smaller, hungrier dragons. They jump out of the canyon make their way to the Jungle Choppers. They board the bikes and make a getaway, but the dragon children catch up to them quick. They appear more agitated then before and begin to tear the bikes apart. Zane realise the noise from the engines is making them angry. He works out a plan, control the bikes remotely and jump off them at the right moment. They all jump up to some nearby vines and the dragons chase after the bikes. 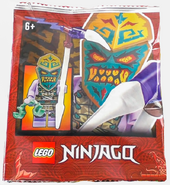