“I am proud to say it is one of the most sophisticated vessels I have designed, and is practically unsinkable.”
— P.I.X.A.L., "Unsinkable"

The Call of Home (flashback)

Intact[1]
The Hydro Bounty is a submarine that P.I.X.A.L. built, and used by the ninja to navigate through the Endless Sea.

Years ago, P.I.X.A.L. worked on the Hydro Bounty.

After realizing that a mysterious power signal was responsible for the disturbance of the marine life and Nya's powers, P.I.X.A.L. and Wu brought up the Hydro Bounty and the ninja agreed to use it to explore the Tartarus Trench.

The ninja used the Hydro Bounty to dive deep into the Endless Sea. The ninja ventured around the Hydro Bounty, giving glimpses of the many rooms. They approached the Tartarus Trench and were attacked by sea creatures, causing the Bounty to lose power and start to flood.

In the ship, the ninja are getting desperate to find a way to get the ship afloat, they come to the conclusion that they should track the energy bursts with Nya and Maya as the elected.

Zane, P.I.X.A.L., Jay and Lloyd continued to find ways to get the ship afloat to save Nya and Maya. In a desperate attempt, Jay charges the battery with his powers, already knowing the consequences. In the end, he comes out fine and they start tracking the Masters of Water.

After saving Nya and Maya, the ninja were surrounded by Maaray Guards and are escorted to Merlopia.

After fighting their way through Guards, the ninja get to the Bounty and escape from Merlopia.

The ninja were in the ship traveling to the Island of the Keepers. To avoid being struck by the storm belt, they go underwater. When they arrive, they surface once more and speak to the Keepers, telling them of the coming danger. They shortly find out that the amulet they have is a fake and get to the Bounty. They warn Cole about the situation, however Kalmaar appears and damages the ship before leaving for Ninjago City.

The ninja were on the Bounty as Nya blamed herself for allowing Kalmaar to get away, fearing the destruction of Ninjago City. However, Benthomaar tells her of how Masters of Water can control sea life. Although doubtful, Nya gives it a try and manages to succeed.

Benthomaar tells the ninja about the Battle of Nine Days and Lloyd hopes that the other ninja have stopped Kalmaar. Eventually they make it to Ninjago and fight the Maaray Guards at the Hydro Bounty.

Go deep beneath the sea with the Hydro Bounty from the NINJAGO®: Seabound TV series to take on Prince Kalmaar and his Guards! Move into boost mode with the wings out, fire the spring-loaded shooters or release a mech and 2 mini submarines into your epic battle. But watch out for the Prince on his chariot! You must claim the prized wave amulet to stop NINJAGO City from being flooded![2]

Say hello to the unsinkable sub, the Hydro-Bounty! Designed by P.I.X.A.L., this thing is as high-tech as it gets. But for some reason Zane seems to think it’s an old wooden pirate ship! Oh Zane…[3]

This massive submarine is the underwater headquarters of the ninja. The Hydro Bounty is packed with extras and is perfect for deep-sea expeditions. Transform your room into an ocean of exciting adventures with this set.[4] 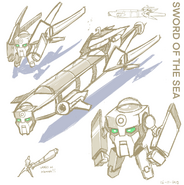