View source
watch 01:25
Jurassic World: Dominion Dominates Fandom Wikis - The Loop
Do you like this video?
Play Sound
“Their hypnotizing powers are useless if their opponent can fight without relying on his eyes.”
— Kai to Wu, "All of Nothing"

The Council of the Crystal King
71769 Cole's Dragon Cruiser

Alive
The Hypnobrai are a tribe of Serpentine, based on the speckled cobra with a hint of the rattlesnake as well. They are known for their hypnosis abilities.

An ancient group of Hypnobrai would later be resurrected and become known as the Pyro Vipers.[1]

How the Hypnobrai came to be is unknown, but their ancestors, the Pyro Vipers had a truce between the humans and Serpentine. They were ruled by 5 generations of Mambo's before being shortly ruled by Aspheera. As time passed, their tribe would come to have arguments and conflicts with the other four tribes of the Serpentine and later humans as well. They were involved in the Serpentine War, and we're locked underground for 40 years for their crimes.

Years after, Lloyd had released them, and they served under his command until Skales took control and became their general. They would soon work under Pythor, who became their King, they helped Pythor in acquiring the four Fangblades of the Great Devourer, only to retreat after the beast is released. They would again switch command with Garmadon then Skales becoming their King, until they were trapped again when trying to bury Ninjago City. After their second imprisonment, they would eventually come to peace with the humans and stop their acts of vengeance, refusing to be included in any affairs of the surface world.

The Pyro Vipers would later be risen back to life after the sorceress, Ashpeera escapes her imprisonment.

All Hypnobrai have a cobra-like hood, with the Soldiers, Warriors, and Generals having a full cobra head. Their colors are generally blue, yellow, and medium/dark gray. Selma, however, is pink. Their eyes are red, with concentric circle patterns resembling a large spiral; these patterns rotate whenever the Hypnobrai begin hypnotizing their opponent(s).

Ordinary Hypnobrai don't have long tails and instead have legs as opposed to the General, who gains a long tail from their staff. Baby cobras are relatively small and look like actual snakes

The Hypnobrai Tomb is located in the Glacier Barrens, and the inside of the tomb is entirely made of ice.

The Hypnobrai tribe were sealed away in the snowy mountains until Lloyd Garmadon accidentally released them. This cobralike tribe have hypnotic powers. With one look of their swirling red eyes, Hypnobrai warriors can force their enemies into doing whatever they want. 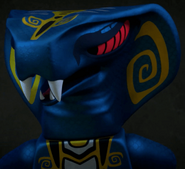 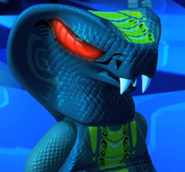 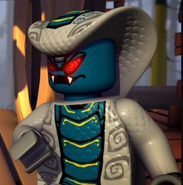 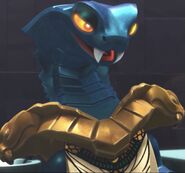 Skales in the Rise of the Snakes mural

Skales with the ninja, the Elemental Masters, and the citizens of Ninjago in the Tournament of Elements mural

Cole DX vs. the Hypnobrai general

Hypnobrai general in the Serpentine War

Statue in the museum of a Hypnobrai general