View source
“I may not have the staff, but I am still your general!”
— Slithraa to Skales, Rise of the Snakes

Intact
The Hypnobrai Staff is the Serpentine Staff of the Hypnobrai tribe. It is currently in the possession of Skales, who obtained it after having defeated his former General, Slithraa, in a Slither Pit.

As the staff was the symbol of leadership within the Hypnobrai, Slithraa never let it out of his hand even when the snakes attacked Jamanakai Village. However, while there, the General was attacked by Cole who claimed the staff and used the anti-venom to release the villagers of their hypnotism.

The Ninja continued to keep the staff safe from Serpentine hands at the Monastery of Spinjitzu. However, this provoked an attack by the Hypnobrai on the monastery to reclaim the staff while the Ninja were preoccupied. Skales returned to the Hypnobrai Tomb with the staff in his possession until he was challenged to a Slither Pit duel by Slithraa. Mezmo held on to the staff during the fight and presented it to Skales when he claimed victory.

In his efforts to take control over the four remaining Serpentine tribes, Pythor challenges the respective generals to their staffs and their allegiance in the Ouroboros Slither Pit. During the fight, Pythor used the stolen Sacred Flute to incapacitate his competition. As Skales was looking to become Pythor's second-in-command, he conspired with Pythor before the fight and subsequently wore earplugs to the fight. Thus he relinquished the Hypnobrai Staff willingly.

Years after the events of "The Day Ninjago Stood Still", the Serpentine Staffs were placed in the vault underneath Borg Tower. Lloyd and Garmadon pass the staff while evading the Oni.

The Golden Hypnobrai Staff is a powerful scepter of power. It belongs to the Hypnobrai General. Also contains a vial of anti-venom which can reverse the hypnotic trance caused by the Hypnobrai stare or tail rattle.[link unavailable]

Snake staff of the Hypnobrai tribe and a symbol of the power of the Hypnobrai general. The staff contains anti-venom that can counteract Hypnobrai hypnosis. When the anti-venom is combined with that of the other four staffs, it creates a white liquid which provides a map to the location of the Fangblades.[1]

The Hypnobrai symbol on the staff in set form

Close-up of the Hypnobrai Staff

Skales (as a warrior) carrying the Hypnobrai Staff. 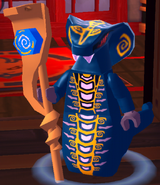 Wielded by Skales in Shadow of Ronin