Deceased
The Ice Serpent was a large serpent that dwelled underneath the Ice Temple where the Obsidian Sais were hidden.

After Zane collected the Obsidian Sais, the Ninja were attacked by the Ice Serpent. The creature's attacks against them were effective. The Ninja were unable to even strike a blow to the creature, and it soon began to destroy the cave. Zane eventually used his elemental powers to create an icy hand to trap the Serpent, allowing the Ninja to strike it, until it was killed.

The Ice Serpent had the power over ice, and could thus spew a freezing cold blast from its mouth, and create a shield of solid ice which it then destroyed to send the large chunks against its enemies. Because of the fragile structure of the cave under the Ice Temple, when ever the Serpent roared, it would cause the roof to further collapse and thus make parts of it to drop down to the floor. At times it would even try an use the tip of it's tail to try an stab it's victims under the icy floor of the cave, and when aggravated enough, would destroy the floor of the cave by "jumping" up into the air before crashing down on the floor, shattering it.

The Ice Serpent about to be trapped by an ice hand, created by Zane 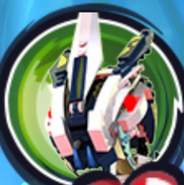