Infamous is the first episode in the sixth season of LEGO Ninjago: Masters of Spinjitzu, and the 55th episode overall in the series. It aired on Cartoon Network on March 24, 2016.

After destroying the Cursed Realm and saving Ninjago, the Ninja have discovered newfound fame. But they must be careful what they wish for because a new evil named Nadakhan the Djinn is freed and a new age of piracy has begun.

Inside a dark chamber with a lamp in the middle, the Ninja clash with several hostile Skulkin. Defeating the undead warriors, the four of them are confronted by Samukai, who is quickly downed by an Energy blast from Lloyd.

Lloyd, presenting the Golden Scroll he successfully retrieved, laments his inability to decipher its contents due to being illiterate, prompting the five to note the importance of reading. Dareth, impressed by the performance, ends the film as he congratulates the crew, revealing the place to be a set and the Skulkin to be actors in costumes. Nya, arriving, is left confused on the sudden end of the movie and is told by Dareth to go teach girls how to apply make-up. With this infuriating Nya, Dareth explains how the Ninja have an appearance as a "boy band" that they need to uphold, especially with his role as their manager. Despite the Ninja dismissing this claim and supporting Nya's position in the group, Dareth celebrates the group's newfound fame following their defeat of The Preeminent. Now celebrities and on tabloids (some of which overplay Lloyd being a Sensei instead of a Sensei-in-Training and the now-deceased love triangle between Jay, Cole, and Nya), the six are forced to escape the studio from a rabid mob of fan girls.

Ninjago celebrates the Ninjas' newfound fame, with TV show hosts attempting to bring up the love triangle for publicity. The next day aboard the Destiny's Bounty 2.0, Master Wu, meditates with Cole, causing the latter to accidentally unlock his ability to become invisible. Shocked and ecstatic, Cole celebrates, only to notice the ruckus outside. On deck, Nya, still furious over Dareth's sexist remark, takes her anger out on the sparring bots, destroying them in a fit of rage. Cole, swaggering onto deck and stumbling on Jay and Zane's chess match, reveals his new ability and comes to the conclusion that his lack of reflection in the Tomb of the First Spinjitzu Master was merely a vision of his invisibility. As Cole leaves, Zane confronts Jay on not mentioning Nya's presence in his reflection, with Jay deciding that he doesn't want to risk his friendship with Cole, and notes that Nya is adamant about being single. Misako, observing Nya's anger, comforts her as she returns to training.

Lloyd, arriving on deck, quickly gathers the others to the control room to receive word from Master Wu, who explains that Clouse, turned into a ghost by the Preeminent, escaped the Cursed Realm prior to its destruction. With video footage of Clouse buying a train ticket to Stiix, the Ninja head there on their Elemental Dragons but decide to stop by the hospital for the Grant-a-Wish Foundation, in order to give an injured Lil' Nelson signatures on his leg casts. Declaring himself the honorary Purple Ninja, Nelson helps the six escape when a horde of fan-girls storm the building, attracted by Kai's social media messages, and escorts the team to the rooftops.

On the roof, the five attempt to hide behind a billboard from paparazzi helicopters, only for Nya to note her inability to discreetly travel to the next roof, having not learned Airjitzu yet. Jay reassures Nya that they can stay behind with her, prompting an offended Nya to remark that she doesn't need to be taken care of and can stick up for herself. Jay, trying to dismiss the remark to Cole as nothing, is confronted by Nya, who demands the implications of him referring the two as 'We'. As helicopters swarm overhead, the Ninja fly up behind a billboard to hide, with Nya, unable to summon a cyclone, being offered Jay's hand. Refusing, Nya once more demands for him to answer her question, and the six are inevitably caught and surrounded by paparazzi helicopters.

Even as Clouse arrives at the wreckage of Stiix, Dareth, on his helicopter, advises the Ninja to accept the publicity. Lloyd warns him of their mission, and Dareth flies them to Stiix on his helicopter, while Clouse investigates a salvage vessel filled with rubble. Searching through the garbage, Clouse finally finds his goal; an ancient artifact known as the Teapot of Tyrahn.

Escaping with the object in tow, Clouse hides in an abandoned building and manages to realign the three slots on the pot, recreating the Sky Pirates insignia and freeing the Djinn trapped inside, whom he identifies as Nadakhan. Demanding to know his location and the year, Nadakhan is confronted by Clouse, who demands three wishes as payment. Nadakhan, warning the Ghost that he can't wish for love, death, or more wishes, grants Clouse's first wish; to be given the Book of Spells. Nadakhan summons the Book of Spells, which Clouse seizes. Having gotten a new source of Magic, Clouse celebrates and decides he no longer has use for his two other wishes, only for the book to burn to ash. Nadakhan gloats and reveals to Clouse that the Book of Spells had already been burnt in a fire by Lloyd, angering the Ghost. Clouse, noting that his status as a ghost has stripped him of his Magic, demands to be turned mortal again by Nadakhan. His wish is granted, and Clouse, turning into a solid human once again, undergoes extreme agony as Nadakhan reveals the process of becoming physical is a painful one. With Clouse writhing in torment, Nadakhan goads the tormented sorcerer to wish for it all to go away, and not in the right state of mind, Clouse obliges. Freely interpreting the wish as he pleases, Nadakhan takes the opportunity to trap Clouse within the Teapot of Tyrahn and mocks him, teleporting away.

The Ninja, having arrived in disguise in order to ward off paparazzi, investigate Stiix as Misako informs them on their transmitter that Wu is searching Domu to figure out what Clouse might be looking for. Meanwhile, Nadakhan, having summoned a human disguise, wanders New Ninjago City, baffled by its technology. Approaching an Infovision stand, Nadakhan is told by the Cyrus Borg replica of its purpose on answering questions, and demands the location of his Sky Pirates. The Info Vision informs Nadakhan of the Sky Pirates' past as the most infamous crew of all time, having sailed on the Misfortune's Keep until they were defeated by Captain Soto and his pirates. With Nadakhan trapped in the Teapot of Tyrahn, the Info Vision reveals that the Sky Pirates were banished across the Sixteen Realms and explains the existence of the Realm Crystal. Nadakhan asks of his lover Dilara's location and learns of her death, and thus decides to seek the Realm Crystal to reunite with his crew. However, the Info Vision informs him that the artifact's location is classified, prompting Nadakhan to ask the location of those who know its placement; the Ninja.

Regrouping, the Ninja lament over their lack of success, only to take notice of a news report on TV. To their shock, footage is shown of them committing various crimes, with Lloyd robbing the bank, Zane sabotaging a roller-coaster and sending its riders crashing off of the rails, Cole destroying various roads, Jay robbing a painting of Master Chen from the Ninjago Museum of History, and so forth. As the team discuss the inexplicable events, with news reports interviewing various associates of the Ninja and the Police Commissioner calling for their arrest, the surviving citizens of Stiix take notice and recognize the group. Already resentful for the destruction of their city, of which they partly blame the Ninja for, the citizens chase the Ninja, forcing them to flee lest they harm the civilians. Avoiding police officers along the way, Jay manages to make amends with Nya as he flies her over the city using Airjitzu.

Misako, flying towards their location with the Destiny's Bounty, is quickly ensnared by several Police grappling hooks as the Commissioner and his officers search the area. With their home and main mode of transport commandeered, the Ninja are forced to split up and flee. Even as the Commissioner confidently claims that they'll catch the six, Master Wu discovers a passage on the Teapot of Tyrahn, only to be confronted by Nadakhan. 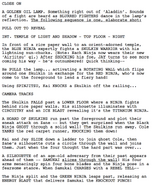 The first draft of the first scene 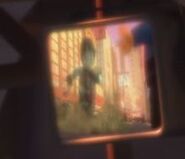 Add a photo to this gallery
Retrieved from "https://ninjago.fandom.com/wiki/Infamous?oldid=375933"
Community content is available under CC-BY-SA unless otherwise noted.