Ninjago Wiki
Register
Don't have an account?
Sign In
Advertisement
in: Clarification needed, Magazine, Ninjago: Masters of Spinjitzu,
and 2 more

Invincible Beast is the 70th issue of the Ninjago Magazine. It includes a small comic titled Through the Mountain. It includes 892070 Munce (Murt with an axe) and was released in December 9, 2020.

The Ninja, Geckles and Munce are tunneling through the Dungeons of Shintaro, escaping Grief-Bringer and the Re-Awakened. Gulch suggests they head towards the Geckle Strong-Cave. They don’t get far through the tunnels before they find it blocked by rubble. Murtessa assures the party that the Munce can deal with it, calling for a 'Roll Squad'. This prompts a group of Munce to roll towards the blockage. Kai expresses concerns for this idea; concerns that become validated when the rocks become dislodged and roll towards the party. Despite some panic, no one is hurt, prompting everyone to continue through the tunnel.

They soon encounter a ravine with lava flowing beneath them. Zane notes that there’s no rope to swing across, but Nya has an idea. She instructs the Munce to form a bridge by holding each other by the legs. The party crosses carefully and Gulch is taken aback by how willing to help the Munce were. On the other side of the chasm, three find the remains of a long deceased Mino. Jay, however, notices it beginning to move. Zane deduces that the Skull of Hazza D'ur’s magic has resurrected it. The skeletal Mino begins to attack, throwing Lloyd to another end of the tunnel. With more space to fight in that section, the ninja fire up their Elemental Powers. They prove ineffective, due to the high volume of Vengestone in the cave.

Zane comes up with a different idea. He gets the ninja to stand in front of a lava pool, baiting the Mino to charge. They jump out of the way as the Mino runs directly into the magma. The ninja relish in the victory and get ready to continue through the caves, when the Mino jumps out of the lava, now covered in magma. With the added danger of spiting fireballs, Zane and Nya use their powers to extinguish the fire surrounding the Mino. The result is the lava cooling and hardening into stone, stopping the beast in its tracks. The Munce and Geckles rejoice in this, with Gulch going so far as to take the Mino and erect it as a statue in honor of the ninja. Murtessa asks what part they get out of the statue, to which Gleck suggests they help carry it. 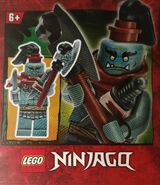