View source
watch 02:07
Spider-Man: No Way Home Trailer Dropped - The Loop
Do you like this video?
Play Sound
“
Did you see me? I disappeared! I mean, did you not see me?
— Cole to Wu, "Infamous"
„

Used
Invisibility is a common power in Ninjago, accessed through abilities such as Light and Anacondrai invisibility. 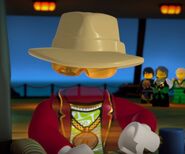