Lost in time
The Iron Doom is a huge mech created by the Time Twins, Krux and Acronix, Cyrus Borg, and the Vermillion. The Iron Doom mech is Serpentine in shape with two arms and large copper swords. When all four Time Blades are plugged into the Time Apparatus, it has the ability to time-travel.

It was designed to help the Time Twins travel back in time to ultimately change the past into their image following their past battle at the Monastery of Spinjitzu. However, the Iron Doom becomes lost in time while heading towards the future as a result of Master Wu ripping out the Reversal Time Blade from the Time Apparatus.

Prior to The Hands of Time

While forcing Ray and Maya to create armor for the Vermillion, Krux also ordered them to design a mech that allowed them to travel through time. Ray designed the mech to appear like a snake to Krux's liking, but due to his lack of knowledge, he was unable to finish the actual component the allowed for time travel.

To begin their plans for creating the power source of the Iron Doom, Krux and Acronix kidnap Cyrus Borg while he was being escorted to safety by Zane.

With Cyrus Borg captured, Krux and Acronix order Vermillion generals Machia, Blunck, and Raggmunk to order their Vermillion forces to begin capturing workers around Ninjago, bringing them all to the Vermillion Swamps. While Kai is investigating a Vermillion helmet at the Ninjago Museum of History, he uncovers the truth about Dr. Saunders' true identity and during the midst of their fight, he finds Cyrus Borg locked away in a sarcophagus. However, Acronix and Krux escape with Borg with the use of the Forward Time Blade.

The Vermillion continued to kidnap workers while the ninja continued to find a way to stop them. They also begin to steal metal from around Ninjago, bringing it all to the Vermillion Swamps, where the construction of the Iron Doom's outer shell was to begin.

While Krux is interrogating Cyrus Borg on why he hasn't begun construction of the Time Apparatus for the Iron Doom, Acronix informs his brother that their workers are already hard at work working on their various projects, such as the Iron Doom's outer shell, as well as armor, weapons, and vehicles for their Vermillion troops. While this happened, the Slow-Mo Time Blade arrives in Ninjago, to which Krux orders Machia to inform the Vermillion troops collecting metal on the surface to change their plans and go after the blade. However, the ninja manages to escape with the blade.

Krux and Acronix angrily debrief Blunck and Raggmunk for their failure in securing the Slow-Mo Time Blade, saying that they need all four Time Blades for the Time Apparatus to work. While this happens, Borg attempts to sabotage the apparatus but is stopped by Machia.

Borg finally finishes the Time Apparatus and attempts one last attempt to sabotage it with a special keypad he installed, but is once again stopped by Machia, who orders her troops to install the device into the outer shell of the Iron Doom.

When Kai and Nya are able to reunite with their long lost parents, they reveal the schematics for the Iron Doom, explaining to their children how Krux and Acronix planned to use it to travel back in time with their Vermillion troops. They also explain that it cannot be completed without the Reversal Time Blade, to which they had hidden away at the Boiling Sea. However, they soon realize Krux and Acronix could use this to their advantage, asking their children to leave, but they are too late; Krux and Acronix, as well as their Vermillion forces, confront the four, revealing the dying Master Wu, saying that they are to get the Reversal Time Blade for them, or else Wu will die.

While Kai and Nya are recovering the Reversal Time Blade from the Boiling Sea, the other ninja are able to sneak into the Vermillion Dome of Doom, where they rescue Cyrus Borg, who explains what The Hands of Time are planning. However, they are confronted by Blunck and Raggmunk, but they fail to see through their disguises until Jay accidentally blows their cover. Samurai X then arrives and assists Zane in escort Cyrus Borg to the top of the scaffolding around the Iron Doom in order to disable it while the ninja fight the defending Vermillion forces below.

As Krux, Acronix, and Machia return to the dome, they see the ninja attempting one final attempt to disable the weapon. However, Krux and Acronix are able to pause Borg, Samurai X, and Zane with the Pause Time Blade just before Borg could finish putting in the abortion codes to disable the Iron Doom. As Machia gets her troops to enter the Iron Doom, Krux and Acronix plug in the four Time Blades into the Time Apparatus, causing the device to activate as the Iron Doom powers on. As Krux, Acronix, and Machia board the Iron Doom, the other ninja, Cyrus Borg, and Samurai X all watch in horror as the Iron Doom creates a temporal vortex in the skies above. As it takes off, the Fusion Dragon carrying Kai, Nya, and Master Wu, quickly drops off Ray and Maya before following the Iron Doom into the vortex just before it closed.

The Iron Doom travels through the temporal vortex until it reaches forty years in the past, directly after the past versions of Krux and Acronix were lost in time. The Iron Doom towers over the Monastery of Spinjitzu while the fight between the past Elemental Alliance and the Vermillion begins. Meanwhile, Kai and Nya exit from their hiding place and attempt to remove the Reversal Time Blade from the Time Apparatus in order to save Master Wu, but to no avail. Master Wu himself then enters the cockpit, questioning what was going on. Kai and Nya explain the situation, but Master Wu tells them that if they change anything, they change everything before passing out again. The two then escort Master Wu out of the Iron Doom, hiding him under a tree just past a stone bridge before going to help the Elemental Alliance by pretending to be their parents.

After the Elemental Alliance is able to begin to gain the upper hand in their fight, Krux and Acronix launch their failsafe plan, destroying Blunck and Raggmunk and taking their helmets before destroying Machia as well. The two then return to the cockpit of the Iron Doom, where they use the helmets to telepathically order the Vermillion to fuse with the Iron Doom, bringing the mech to life. A long fight begins, with the Iron Doom seemingly gaining the upper hand until Kai and Nya use the Fusion Dragon to combat the Iron Doom. After Nya bails from the dragon to retrieve something, Kai delivers a critical blow to the Iron Doom, causing it to fall over and look down the side of the mountain, scaring Krux and Acronix. As Krux and Acronix get the mech up with their helmets, Acronix explains that they can travel anywhere it time they want, telling his brother that they must go far into the future if they are to win before using the Iron Doom to create another temporal vortex with the use of his helmet.

As the Iron Doom travels towards the future, Krux and Acronix are confronted by Kai, Nya, and Master Wu in the cockpit, where a final battle begins. During the struggle, Kai is knocked out of the main window, holding onto the edge of it as Krux confronts him, saying that he'll never interfere again before he is kicked down by Nya, allowing Kai to climb back into the cockpit. As Acronix kicks down Master Wu in favor of saving his brother, Master Wu realizes they are passing the present. As Krux and Acronix are about to kill Kai and Nya, Master Wu climbs out to the Time Apparatus and rips out the Reversal Time Blade, causing the Iron Doom to spiral out of control within the vortex. Master Wu manages to catch Kai and Nya from falling but lets them go while giving them the Reversal Time Blade, saying he is putting off until tomorrow for what cannot be done today. As the two return to the present, Master Wu confronts a defeated Krux and Acronix within the cockpit, saying it ends now. As the three fought, the Iron Doom continues to spiral out of control towards the future as it becomes lost in time with them still aboard.

An abandoned Iron Doom was located on a grassy hill in a post-apocalyptic Ninjago.

The Time Apparatus on the mech's chest allows the Iron Doom to channel the power of the Time Blades, using their powers against opponents as color-coded energy beams. When all four blades are connected to the Time Apparatus, the Iron Doom is able to travel back or forward in time to whatever extent its pilots desire.

For conventional combat, the Iron Doom is armed with two massive swords that it normally carries on its back. It also has a cannon in its head that can fire a barrage of projectiles seemingly made from brittle, red-hot metal.

This giant snake-shaped transport is Krux and Acronix’s ultimate weapon, initially coined the Vermillion Transport Armor (VTA). Reluctantly designed at sword-point by Ray and constructed under duress by the builders of NINJAGO City, the Iron Doom is built from all the metal stolen during Operation Heavy Metal. In the heart of the Iron Doom is an apparatus created by Cyrus Borg that harnesses the power of all four Time Blades to time travel.

When enough Vermillion snakes slither inside, the Iron Doom becomes an enormous, semi-sentient armored monster that is part machine/part snake and is several stories tall. The Iron Doom’s slithering power makes it extremely mobile and with its multiple arms and blades, it can take on numerous foes at once, dispatching them with ruthless ferocity. It is controlled by Krux and Acronix, who ride atop it and use the helmets they took from Blunck and Raggmunk to control it with their minds. Because the snakes that once formed Blunck, Raggmunk and Machia are among those that slithered into the Iron Doom, it speaks in a synthesized combination of all three’s voices. When the Twins traveled into the future, the Iron Doom has not been seen since.[1]

The Iron Doom in the Hands of Time mural.

The Iron Doom upon its full creation.

Krux and Acronix in the cockpit of the Iron Doom.

The Iron Doom arriving in the past immediately after the past Krux and Acronix were lost in time. 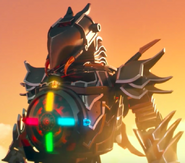 The Vermillion merging with the Iron Doom.

Retrieved from "https://ninjago.fandom.com/wiki/Iron_Doom?oldid=646110"
Community content is available under CC-BY-SA unless otherwise noted.