Island of the Keepers

Not to be confused with the TV installment or the book.

“This is the safest place in all the realm. This island has concealed the amulet for thousands of years.”
— Mammatus to the ninja, "The Storm Amulet"

Island of the Keepers

The Island of the Keepers is a remote island in the Southern Coast of the Endless Sea.

Like the rest of the islands during Wojira's reign, the Island of the Keepers was originally submerged in the Endless Sea. Eventually, the island rose up and became inhabited by the islanders, who helped the First Spinjitzu Master fight Wojira during the Battle of Nine Days.[5]

Thousands of years later, Timothy Batterson went on a balloon tour until his hot air balloon was blown off-course to the Island of the Keepers. He was stuck on the island for a year but was able to escape by using a raft.[4] However, during his time on the island, he was struck by lightning twelve times while he was trying to escape.[6]

Misako and her explorer group are going through the island before they are attacked by Stone Guardians. Later, the ninja realize that they went there and find Twitchy Tim who tells them about the dangers of the island. Using the ninja's catamarans, they make it to the island and use Jungle Choppers to keep going through it.

The ninja made it to a section of the island where they meet Zippy, a friendly dragon. The ninja were chased through the island after battling the Stone Golems and Lloyd separates from the group. Although not being chased, Kai, Nya, Jay, Cole, and Zane get knocked out by electricity from the Keepers.

The ninja are sent to a prison cell where they meet up with Misako, Wu, Clutch Powers, and the interns. After being released by Lloyd, they attempted to find Jay but could not. Meanwhile, Jay was treated with food by PoulErik and is called the "gift".

As the ninja were searching for Jay, they realized Clutch and Dwayne were missing and speculated that they were after the Storm Amulet. Their suspicion were correct as they caught Clutch trying to steal the amulet. This results in everyone being zapped.

After reawakening, they spot a cheerful Jay with his hands tied up to the chair and being placed on a boat. Mammatus stated they had to give sacrifices in order to please Wojira. Jay realizes that he's in danger as he was sent out to sea.

While performing the sacrifice, the ninja escaped and attempted to rescue Jay, but he was captured by "Wojira", who leaves a wooden tooth.

After reaching the shore without Jay, the Keepers surround the ninja with Mammatus staring at them. Lloyd gave Mammatus the wooden tooth and claimed the Keepers were tricked into giving their riches away. Mammatus then explained how it happened and drew up a map of potential hideouts for the fake Wojira.

Soon, the henchmen driving the fake Wojira arrived to their cave and wonder if their boss will be pleased with a human sacrifice. When they attempted to retrieve Jay, he resists until the rest of the ninja arrived. They soon realized that Ronin was the master thief and he tried to make a quick getaway with his ship, but it's destroyed by Tim, who crashed into it.

After Ronin and his gang were sent to prison, they caught Clutch Powers after he attempted to steal the amulet for himself again, but they unfortunately took the fake amulet instead. Sitting near the coast, Lloyd wondered if Wojira is actually real.

The ninja defeated the Legendary Dragon and saved Wu, but their master revealed everything to be part of a lesson to teach the six Fundamental Virtues of Spinjitzu.

The Island of the Keepers is located on the Southern Coast of the Endless Sea in an area called the storm belt, which keeps it hidden from the outside world. The island itself is very mountainous and there are many cliffs and mountains. There are also many sharp teeth-like rocks in the water around the island. The beach of the island is relatively small and just a short distance from the shore begins a large cliff stretching along the coast. On the east side is a large rocky sharp cliff jutting into the sea. There is also an active volcano in its immediate vicinity. On the other side is a large waterfall springing from a high mountain. Almost all over the island there is a dense jungle consisting of green and pink trees. In the deeper part of the jungle is also the Keepers' Village. In a certain part of the jungle, there is also a deep gorge, through which the rope bridge leads. In the middle of the island is a huge mountain, the top of which is covered with snow.

Ninjago Island is well charted and almost every corner has been explored. But the seas surrounding Ninjago are mainly unexplored. Rumour has it there is a hidden island, protected by fierce thunderstorms and untouched by ninja. Will our heroes find it? What awaits them there?[7]

The island in the book.

-art not final- from 'The Uncharted Island' book

In The Island's intro

The Island of the Keepers pictured on the sea scroll. 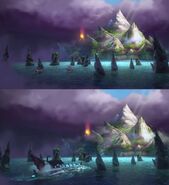 In a Ninjago Magazine