Ninjago Wiki
Register
Don't have an account?
Sign In
Advertisement
in: Ninjago: Masters of Spinjitzu, 2015, 2015 characters,
and 20 more
English

View source
watch 01:25
Jurassic World: Dominion Dominates Fandom Wikis - The Loop
Do you like this video?
Play Sound
“Well, I for one don't like following rules. The minute you tell me the coast is clear, I'm busting out of here.”
— Jacob to Cole and Karlof in "Ninja Roll"

Jacob and the Elemental Masters united against Chen, who completed a spell that transformed him and his followers into fake Anacondrai. For an unknown reason, Jacob didn't fight in the Corridor of Elders with the other Elemental Masters.

Months after the war's end, Nadakhan imprisoned Jacob in the Djinn Blade, though after Jay made his final wish, recent events were erased and he was freed.

It's unknown where Jacob was during Lord Garmadon's rule, due to his absence from the Resistance.

Jacob Pevsner was born as a descendant of the previous Elemental Master of Sound. At some point, he unlocked his True Potential and Garmadon saw him utilize his abilities.[2]

Jacob boarded Chen's ferry with the other Elemental Masters to come to the Tournament of Elements. He was seen practicing on his sitar.

Jacob was among the Masters when Chen explained how the Tournament functioned. Jacob was one of the Masters who obtained a Jadeblade during the competition.

Jacob and others watched the first few tournament fights.

Jacob was fighting Skylor in the tournament, but he lost. When he was in the factory with Cole and Karlof, he talked to them and tried to escape from the factory, but he got caught by Clouse, who brought Jacob to feed his pet giant Anacondrai snake (implied to be fed to).

Still on the island after the other Elemental Masters unlocked their Elemental Dragons, Jacob stated that he was feeding Clouse's pet (not being fed to her) and that the snake would not eat (not knowing she was dead) and wondered where everyone was.

Jacob managed to make it back to Ninjago, and he was present with the other Elemental Masters when they discussed their next move in the Samurai X Cave. For some reason, Jacob didn't fight the Anacondrai warriors in Corridor of Elders with other Elemental Masters, probably because he lost his sitar. Without it, he became mostly useless in the fight.

After Tournament of Elements

Ronin found or stole Jacob's sitar and placed it in his pawnshop for sale.[3]

At one point, Nadakhan imprisoned Jacob in the Djinn Blade with the other Elemental Masters.[4]

Jacob has a black mustache and goatee with a large black afro hairstyle and teal-colored glasses with silver stars in the middle. His clothing is very 60's or 70's. He wears a teal jacket with gold accents while his shirt is orange with a gold collar. He also wears teal pants and on the back of his jacket is a golden barbell insignia.

His Legacy minifigure has no goatee and has star-shaped glasses, not round glasses with stars inside. He also has a hole between his front teeth. He also has shoulder pads and a white scarf under his neck.

At first, this blind fighter does not appear to be a threat, but his loss of eyesight only enhances his other senses. What he lacks in vision, he more than makes up with in auditory perception. Coupled with the sonic strum from his sitar, the Master of Sound is a force to be reckoned with.[1]

Jacob Pevsner in the background of a DVD cover for The Tournament of Elements.

CGI version from Shadow of Ronin. 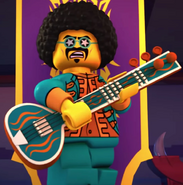 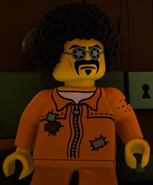 Jacob waiting on the dock with the other Elemental Masters

Jacob playing on his sitar on the ferry

Playing his on sitar

Working in the noodle factory

Caught trying to escape the factory

With the other Elemental Masters 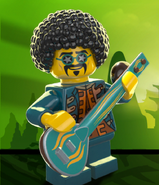 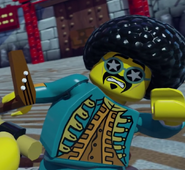 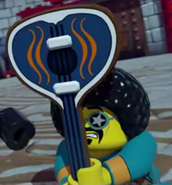