This is about the blades in the TV series. For the blades seen in the sets, see Jadeblade Weapons.

“Behold, a Jadeblade. Here, it represents life. Obtain it, move on. Allow your opponent to take it, loser. The rules are simple. Every match will be different. No two fights will be the same. Your powers will keep you in the tournament. Use it or lose it.”
— Chen to the Elemental Masters, "Only One Can Remain"

Only One Can Remain
70752 Jungle Trap

Intact
Jadeblades are weapons carved from the bones of the departed Serpentine warriors and reserved for the greatest Anacondrai leaders.[1] They were used in the Tournament of Elements by Master Chen. The Elemental Masters fought each other to obtain Jadeblades, as possessing one allow the competitor to move on in the tournament, while competitors who failed to secure one (either to be found or battled for it) were disqualified from the competition.

Prior to Tournament of Elements

During the Serpentine War, the Jadeblades were carved from the bones of the departed Serpentine warriors and reserved for the greatest Anacondrai leaders. Forty years later, Chen helped himself to their bones while tomb raiding and carved his own to use in the Tournament of Elements.[1]

After Chen explains the rules of the Tournament of Elements and everyone but Karlof gets a Jadeblade and he is taken out of the tournament.

In all three battles between Griffin and Gravis, Bolobo and Neuro, and Ash and Kai, the six compete against each other for a Jadeblade with Kai, Griffin, and Neuro winning their matches. Later, Jay and Cole are set up to fight each for a Jadeblade. Cole grabs it but he then passes it to Jay for him to win.

A tournament between Skylor and Jacob was held with Skylor winning. Later, a race between Lloyd and Chamille was held. The rules were to make laps with a Jadeblade in their hand. Even though the tournament was rough with everyone being against the ninja, Lloyd ended up winning.

Jadeblades were in Ronin's pawn shop.

A Jadeblade replica was held by a life-sized statue of Chen in the Hall of Villainy at the Ninjago Museum of History.

A painting of a couple of Jadeblades were placed in the Ninjago Museum of History.

The Jade Blades were carved from the bones of the departed Serpentine warriors and reserved for the greatest Anacondrai leaders. Chen helped himself to their bones while tomb raiding and carved his own to use in the Tournament of Elements. This was another reason that the returning Anacondrai took an instant dislike to Chen and his worshipers. Now Skylor keeps the Jade Blades locked up, safe and sound, just in case.[1] 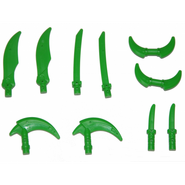 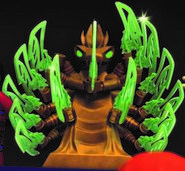 A Jadeblade in Jay's room.

A Jadeblade in a Chen's arena.

A Jadeblade in a tree.

A Jadeblade in a rock. 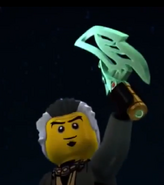