You may be looking for Jay's adoptive mother.

Jay's Mother, also referred to as Lightning, was the Elemental Master of Lightning during the era of the Serpentine War and the wife of the late Cliff Gordon. Her current status is unknown.

Years ago, she fought alongside the previous generation of Elemental Masters led by Wu and Garmadon in the Serpentine War. After a long battle, the Elemental Masters were victorious sealing off the many serpentine tribes and banishing the Anacondrai Generals to the Cursed Realm. At some point after the war, the previous Elemental Master of Lightning met and married actor Cliff Gordon. Their union led to the birth of a son named Jay, who would go onto inherit her abilities. For reasons unknown, the couple left their infant son in the care of Ed and Edna Walker, who he would see as his parents, unaware of his true heritage. Sometime later, Cliff died of unknown causes while it is unknown what happened to her.

The Hands of Time and A Time of Traitors

The past Elemental Master of Lightning can be seen in the giant portrait depicting the battle between the Elemental Masters and Krux and Acronix at the Monastery of Spinjitzu.

At the battle at the Monastery of Spinjitzu, the Master of Lighting subdued Acronix after the Time Twins were stripped of their powers, though Acronix and Krux broke free of their captors and escaped in a Time Vortex, where they would be lost in time.

The past Master of Lightning was seen in Ray's flashback as he recalls the events leading up to the banishment of Krux and Acronix.

While the events of the past played out as normal following the battle with Krux and Acronix at the Monastery, the Iron Doom suddenly appears from another Time Vortex, landing in front of the Monastery, where the future Krux and Acronix emerge from the machine. Surprised, the past Master of Lightning asks the past Master of Ice if she's seeing things. As Krux says that they are true, she complains that she thought she was finally able to go on her honeymoon with Cliff.

While she tries to defeat the Iron Doom, she and the Master of Ice are slammed into the wall of the Monastery, though they recover. She eventually hides with the other Masters in the Monastery while Kai and Nya fight the Iron Doom with the Elemental Water-Fire Dragon before giving them a distraction so they could land a solid blow on the Iron Doom. Eventually, she watches as the Iron Doom, Elemental Dragon, Kai, Nya, and future Wu leave through a Time Vortex. She presumably had her memory erased of fighting the Time Twins from the future, due to Present-day Wu telling his past self to drink Obscuritea to restore the timeline. 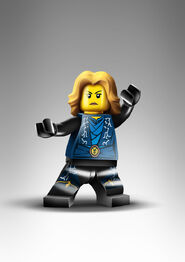 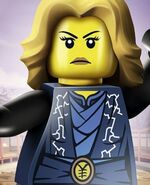 Retrieved from "https://ninjago.fandom.com/wiki/Jay%27s_Mother?oldid=511185"
Community content is available under CC-BY-SA unless otherwise noted.