View source
watch 01:25
Jurassic World: Dominion Dominates Fandom Wikis - The Loop
Do you like this video?
Play Sound
“He's shown his true colors, and they are colors no one likes. I can put aside our differences if you think you five can make a difference.”
— Jet Jack to Faith and the stranded ninja, "Lessons for a Master"

Rhona Rees
Jet Jack is a female Dragon Hunter who flies with a jetpack. She is currently second-in-command.

She takes part in the ambush on the ninja, and after capturing them, takes them, alongside the ruins of the Bounty, back to Dead's End. She, alongside some Hunters, brings them into Iron Baron's throne room, and was near the Baron's throne laughing at the ninja with the others after their blindfolds are taken off.

She questioned the ninja alongside Iron Baron, asking that if they were alone, then who did the diapers they found belong to, to which Kai replied that they were Jay's.

The Hunters prepare to use the ninja as bait to lure Dragons.

While sitting at a campfire with her fellow Hunters, she was among those that explained to "Rocky Dangerbuff" and "Dangerbuff Jr." about why Iron Baron is desperate to find the Firstbourne.

She was with Iron Baron when he was about to cook the Wind Dragon and was surprised when she saw the fake Dragon that was built by Cole and Wu. When they fought back, the real Firstbourne came and attacked them. They found Cole and Wu teaming up with the ninja and Daddy No Legs ordered the others to attack them. Iron Baron later told them to hunt for the ninja.

The Dragon Hunters find Daddy No Legs and Muzzle tied up. They informed them Heavy Metal and the ninja did this and they went after them. Once they caught up, Jet Jack managed to put a tracking device on one of their vehicles.

When Iron Baron leads the hunt for Faith and the ninja in his HunterCopter, Jet Jack partakes in it by hopping on her vehicle. She is shocked to discover Faith was a female Hunter like her but Faith replies she's better and sends her flying, throwing her back at Baron. Jet Jack questioned Baron on this as he responded by making Faith a prize as Baron told his subordinates whoever captured the traitor would be his new second-in-command.

Very soon, Baron changed this after learning Wu was the son of the First Spinjitzu Master but Jet Jack ended up capturing Faith.

After the ninja return to rescue Faith and find her buried in the ground from her neck downwards. As Wu approaches her, she tries to warn him by mumbling through her gag. Wu removes the gag, but quickly realize it's a trap, and are captured by the Dragon Hunters.

That night, Jet Jack and the Hunters celebrate their victory while holding Faith and the ninja captive.

When Baron taunts Faith on her predicament, Jet Jack listens as the latter tells the other Hunters that Baron lied to them about the Oni who have been gone from the realm for centuries and tells them that he possibly killed the Hunters to get Dragonbone Blade. This causes Jet Jack to ponder on her words before Baron silences any growing rebellion by asking threatening them. Jet Jack watches as Baron tortures the ninja before Wu breaks free.

Jet Jack hears Wu reveal himself as the son of the First Spinjitzu Master. She joins her fellows in attacking him but is repelled by the latter until Baron stops this and speaks to Wu. She sees Baron making a deal with him to go after the armor with him. As they walk, Jet Jack asks to accompany him since she technically captured Faith and he promised to make her his second-in-command. Baron simply laughed at her words and tells her that once he had the armor all of them will need him more as he leaves.

After realizing that Iron Baron wanted the Dragon Armor for himself, Jet Jack and the other Hunters talk amongst each other. Jet Jack then notices the ninja trying to free themselves, she questions this before releasing them herself. Jet Jack tells Faith and the ninja to go search for Baron and Wu, only for them to return without them before the Firstbourne soon appeared with Wu, wearing the Dragon Armor. Jet Jack questioned how Wu was riding the dragon without chains before Faith tells her he didn't need any.

She is pleased to hear Baron is no longer a threat and is standing next to Faith smiling. She watches as Faith promises the ninja that they will start a new way of life without Baron. Jet Jack bids the ninja farewell as they leave on Dragons from the realm.

Faith informed Wu and Misako about what happened in the Realm of Oni and Dragons. The Oni attacked the realm and the Hunters try to defend themselves with the help of the Dragons, but only Faith and Firstbourne managed to escape. She was freed when the Oni were defeated.

Jet Jack has white skin and wears a similar uniform just like other Dragon Hunters, but she has a black mohawk as her hairstyle, rusty gray sunglasses with a dent in the left eye, red scar-like markings on the right side of her face, braces, and pink lipsticks. Also, she has a jetpack attached to her back, which can be quickly activated while there's a chase. 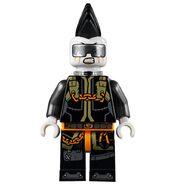 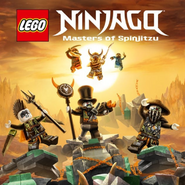 Jet Jack on top of a Dragon with Iron Baron and Heavy Metal in a promotional poster for Hunted. 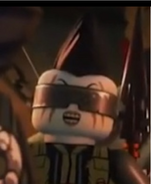 Jet Jack with other Dragon Hunters. 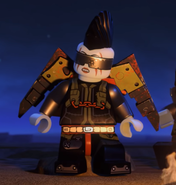