“
We are on the island. Can you fix on my location and deploy the Jungle Choppers?
— Lloyd to P.I.X.A.L. in "Uncharted"
„

Intact
The Jungle Choppers are motorbikes that were used by the ninja and Twitchy Tim.

P.I.X.A.L. deploys the Jungle Choppers, and the ninja and Twitchy Tim get in them and begin to ride.

After riding the Jungle Choppers for a bit of time, the ninja dismount so they can travel through a small section.

Lloyd's chopper bike is great for getting around the island. Its beach-buggy wheels are built for sandy and rocky terrain, and its top section separates for windsurfing on water — or in the sky![1]

Tear through the dense jungle of a mysterious island on Lloyd’s Jungle Chopper Bike. But beware of the Rumble Keeper – he’s ready to fight back with his dangerous spear to protect the precious storm amulet! Fire the bike’s 2 shooters at him or detach the flyer from the bike so Nya can use it as a surfboard to join the battle. Who will triumph in this amazing, all-action clash?[2] 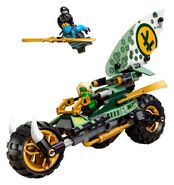 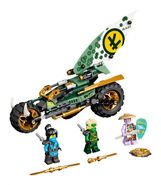