View source
“They look pretty hungry!”
— Nya to the other ninja, Hunted!

The Keepers of the Amulet
71746 Jungle Dragon

Uncharted jungle
Jungle Dragons[1] (also known as island dragons[2]) are a type of dragon from the uncharted jungle on the Island of the Keepers.

Lloyd first senses Zippy's presence before he jumps down with a coconut. Before Kai, Jay and Cole are able to attack him, Nya realizes the dragon does not appear to be harmful and plays with him. Jay names him Zippy and Zane states he is docile. When Lloyd expresses his concerns, Nya reluctantly throws a coconut across a distance to keep the dragon preoccupied as they leave. Later on, when Cole is about to drink a coconut, Zippy takes it and keeps it in his mouth. He then cowers in fear at the Stone Guardians.

After the ninja escaped from the Stone Guardians, they ran into Zippy's uncle. Although Nya thought the dragon would be friendly like Zippy, he tried to attack her after she threw a coconut, leading Cole to referred the dragon as "Zippy's bad-tempered uncle."

When the ninja used their Elemental Powers on the dragon, Zippy's uncle used Storm to create an energy field so he could protect himself from the ninja's elements and lured them to a canyon, where he could feed them to his children.

Zippy appeared behind Lloyd, wanting to play. After a few attempts to get the dragon to leave, Lloyd realized he could use Zippy's playfulness to his advantage, throwing coconuts at the Keepers so that Zippy would scare them off. Later, Zippy was being chased by or was chasing some Keepers.

Zippy appeared and scared the Kryptarium inmates and Ronin.

Zippy was at the Keepers' Village.

They are shown to be capable of jumping far distances despite their size, and seem to possess remarkable speed. Adults can also use Storm and change color like a chameleon.

Jungle Dragons have teal or green scales, gray curving horns, a white underbelly, two tusk-like teeth protruding from both side of his mouth, gray and spotted feet and gold spikes running down from their head to tail. They have gold markings on their foreheads, thin, plant-like wings, and a few yellow-orange leaves running down their necks in between their horns and ending at their wings. 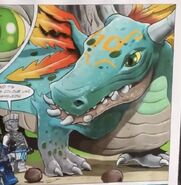 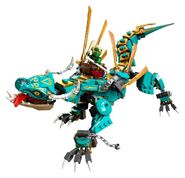