Jillian Michaels
Kabuki were Chen's actors who served him daily. They lived in Chen's Palace and are predominantly formed by women, though some men are also present. It is unknown if Chen was paying the Kabuki or if he had enslaved them.

Neuro entered the Kabuki's room in order to read Chen's mind; however, Clouse gets in the way and threatens to tell the other fighters that he's helping the ninja. Neuro reads his mind for a moment and promptly leaves.

When the Elemental Masters took off to find Skylor, Dareth stayed behind and was telling stories about his past adventures.

When Chen and his followers left the island after transforming into Anacondrai, the Kabuki took control of it for a short time, before Skylor taking over her father's family business.

A Kabuki is seen in a commercial showing the screen of a tower when the Destiny's Bounty passes it.

A few Kabuki are seen at the celebration after Lloyd defeated Emperor Garmadon.

Kabuki wear make-up and a kimono. 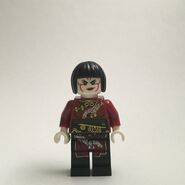 Retrieved from "https://ninjago.fandom.com/wiki/Kabuki?oldid=663652"
Community content is available under CC-BY-SA unless otherwise noted.