Ninjago Wiki
Register
Don't have an account?
Sign In
Advertisement
in: Ninjago, Ninjago: Masters of Spinjitzu, 2019,
and 14 more
English

Intact
Kai's golden katana is a katana owned by Kai.

Kai's golden katana appeared in Zane's vision about the Aspheera and the Ice Emperor.

The ninja traveled around Ninjago City with their weapons including Kai, who brought his katana.

Kai's katana was seen leaning on the luggage.

Kai was wearing it when the ninja were attacking the elemental cobras in the streets of Ninjago, and later he used it to hit one of them in the Ninjago Museum of History.

Kai wore it on his back when he went with Cole and Jay to find Skales in the sewers.

Kai used it to fight against some of the Pyro Vipers in the Hangar Bay, unfortunately he and the others were quickly outnumbered.

Kai had it on his back when he was waiting with the other ninja for Lloyd to get the Traveler's Tea, and later when they were fighting against Master Wu.

Kai wore it when he and the ninja were investigating Jay's dissappearance.

Kai was used his katana to fight against some Awakened Warriors, unfortunately the ninja's rescue mission failed and they were imprisoned.

Kai held his golden katana while he was with the other ninja. When Zippy encountered the ninja, Kai brought out his sword before they realized Zippy was friendly, and he also caught a coconut on his sword.

Kai used his golden katana to fight against some of Ronin's henchmen and some Kryptarium inmates.

Kai used his golden katana to fight against some of Miss Demeanor's henchmen.

Kai used it when he was training with his father in the Monastery. He later used it in the Explorer's Club to fight against some Merlopians.

Kai used it to fight against Kalmaar outside of the Explorer's Club, he later wore it when he was following Kalmaar, Nelson and Antonia.

Kai used it to fight against some merlopians at the shores of Ninjago City.

Kai used it to fight against some merlopians while Jay was fighting against Kalmaar. Ha later wore it when Nya left him and the others.

A render of the Golden Sword 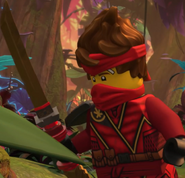