The Mask of Deception
70638 Katana V11
Kai's twin katanas are weapons used by Kai. The swords appear as two silver katanas with Kai's name written in Ninjargon on them. 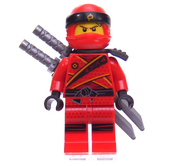 Kai holding his Twin Katanas on the Destiny's Bounty 2.0 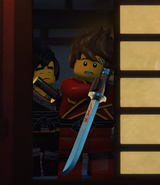 Kai slicing fruit with his Twin Katanas
Add a photo to this gallery
Retrieved from "https://ninjago.fandom.com/wiki/Kai%27s_twin_katanas?oldid=573889"
Community content is available under CC-BY-SA unless otherwise noted.