Ninjago Wiki
Register
Don't have an account?
Sign In
Advertisement
in: 2021, 2021 vehicles, Ninjago: Masters of Spinjitzu,
and 3 more

View source
watch 01:33
Wiki Targeted (Entertainment)
Do you like this video?
Play Sound
“
To my chariot!
— Kalmaar to the Maaray Guards in "Master of the Sea"
„

Intact
Kalmaar's chariot is carriage that was used by Kalmaar. Originally, the chariot belonged to Trimaar, as he was the previous ruler of Merlopia.

Trimaar goes around the Endless Sea exploring with Kalmaar. But when he sees Benthomaar being attacked by eels, he jumps off the chariot.

Kalmaar chases the ninja on the chariot but stops when the stones block the way.

Kalmaar and the Maaray Guards travel to the Island of the Keepers. Kalmaar gets there on his chariot and leaves on it after learning the real location of the Storm Amulet.

Kalmaar escapes with the Storm Amulet on the chariot and returns to the Temple of Wojira to awaken Wojira. 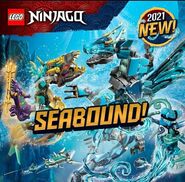