“What is the best way to defeat an enemy?”
“Easy, with a sword!”

Way of the Ninja
2258 Ninja Ambush

Intact
The katana is a very common and well-known ninja weapon. It appears as a sword with a leather-wrapped hilt, a very small, flat guard, and a long, thin blade with a slight curve away from the cutting edge. They appear in several colors, most notably gold, silver, and black.

Kai, Lloyd, and Nya initially specialized in using katanas. To date, only Kai still uses a katana as his weapon, using twin katanas and a golden katana later on.

Gold katanas are periodically used by the ninja. They are prominent in the Ninjago Spinners game, as the Golden Weapons hold more power in the game.

Silver katanas are used very commonly by the ninja, being perhaps the most common variant next to gold. Silver katanas were Kai's main weapons in Seasons 7 through 10. The Stone Army wielded silver katanas in the show.

Spring-green katanas were first used by the Ghost Warriors. They were later used by the ninja in the Prime Empire sets.

Red katanas were first used by the Sons of Garmadon, most prominently Mr. E. The Red Visors used red katanas in the Prime Empire sets; the Stone Army and Nindroids used them in Legacy sets as well.

Azure katanas were used by Skales in Rise of the Snakes for the first time (although these were made out of Ice in the show). Later, they were used by Blizzard Samurai in Secrets of the Forbidden Spinjitzu. Hausner also used azure katanas in the Prime Empire sets.

Orange katanas were used by Richie in the Prime Empire sets, as well as Cole in the core sets.

White katanas were exclusively used by the Stone Guardians in The Island sets.

Kai's katanas facing down in the 70638 Katana V11 set instruction

The difference between the old katana mold (top) used in Ninjago sets from The Pilot to Posession. And the new katana mold (bottom) used in Skybound to now.

Skales wielding an ice katana in the Slither Pit

Nya wielding a katana against the Time Twins

Kai wielding a katana against Krux

Kai wielding his katanas against Zane during training

Mr. E wielding four katanas against the ninja including Kai with two katanas 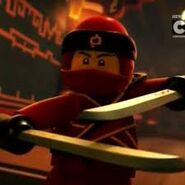 A katana in the weapons rack