The Katana 4x4 (also known as the ATV) is a Ninja Vehicle owned by Kai.

Shortly after the end of the Oni Invasion, P.I.X.A.L. had been working on the Samurai X Cave 2.0 for six months. She also built the Land Bounty, Dirt Bike and the Katana 4x4. During construction, the Ninja didn’t notice anything due to them being lazy.

The Ninja were planning to go to the Desert of Doom on a quest and before they did, P.I.X.A.L. told them about the vehicles she built. After exploring the Samurai X Cave 2.0, they took the Land Bounty as well the Dirt Bike and the Katana 4x4 into the Desert of Doom. After some traveling, The Ninja parked their vehicles in an oasis where they relaxed until they encountered Beohernie. They tried to escape him, but the beetle ingested a critical engine part that the Land Bounty could not run without.

Zane was eaten by Beohernie and was able to get the engine part back. After obtaining the component, the Ninja placed the Dirt Bike and the Katana 4x4 in the Land Bounty while using the Land Bounty to flee from the Beohernie.

After P.I.X.A.L. saved the Ninja from the Ancient Pyramid using the ShuriCopter, they used the Land Bounty, Dirt Bike, and the Katana 4x4 to ride to Ninjago City and stop Aspheera.

The Ninja rides their vehicles including the Katana 4x4 into Ninjago City and saved Fred Finely by defeating an Elemental Cobra which nearly devoured him.

Along with the Katana 4x4, The Ninja arrive with their vehicles to save the Police Commissioner and his crew when they were surrounded by Elemental Cobras.

Power across the NINJAGO® Desert of Doom in Kai’s Katana 4x4 ninja vehicle with this exciting LEGO® set! Fire the spring-loaded shooters at Char and the Pyro Vipers. Smash into the enemy with the ninja car’s shuriken slicers. Spin into a Spinjitzu tornado battle with ‘powered-up' LEGO NINJAGO hero Nya FS. You must defeat these dangerous snakes and claim the Scroll of Forbidden Spinjitzu![1] 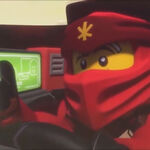 Kai inside the Katana 4x4

Retrieved from "https://ninjago.fandom.com/wiki/Katana_4x4?oldid=402667"
Community content is available under CC-BY-SA unless otherwise noted.