View source
watch 01:25
Jurassic World: Dominion Dominates Fandom Wikis - The Loop
Do you like this video?
Play Sound
“That was a long time ago. And it only happened once. Trust me, we will both find our animal forms. And we will run together in the forests all day and night.”
— Kataru to Akita, "The Last of the Formlings"

Cole Howard
Kataru is a Formling who lives in the Never-Realm, and the older twin brother of Akita. He has the ability to morph between the form of a bear and a human. He is the only known Formling aside from his sister that hadn't been frozen by Boreal, who took him as a prize. For decades, Kataru would be held prisoner before joining the Resistance to dethrone the Emperor.

After the Ice Emperor was defeated and the realm was freed, he reunited with his sister and peace returned to the realm.

The Last of the Formlings (Flashback)

Katuru appeared in this episode in a flashback, along with Akita and the other Formlings. He gave her confidence that they will find their animal forms and will not be formless, like Vex, who had threatened the villagers. A week later, they participated in the Choosing. Around this time, the two achieved their forms with Kataru becoming a bear and his sister a wolf.

As he and Akita were celebrating in finding their animal forms, their village was frozen by the fierce Ice Dragon, Boreal on the orders of the Ice Emperor and Vex.

When Boreal attacked Akita, Kataru defends his sister. Despite warnings from his sister, Kataru stayed to fight and stood his ground. In the process, Kataru was taken prisoner by Boreal and presumed his sister was killed.

Upon seeing Lloyd leave to find Zane, Vex visits Kataru and offers him a place in the Blizzard Samurai, but he refused by throwing his food at Vex.

Kataru was disturbed by the Ice Emperor, who was banging his staff to awaken Boreal.

When Lloyd was brought to the dungeon, Kataru greeted him. After he revealed his name, Lloyd realized he was Akita's brother and they talked about his sister. Kataru was relieved his sister was alive, surprised that she was not frozen. Kataru then revealed he was taken as a prize by Boreal and how he lost track of time in his imprisonment. Soon, Vex arrived to taunt Lloyd about his efforts to get through to Zane and promised to destroy him. As Vex left, he taunted Kataru too by reminding him of the bars on his cell.

Kataru later advised Lloyd not to waste his strength trying to escape because it was futile. But not for long before Grimfax released and allied with them to overthrow Vex and Zane in order to free him.

The Resistance escaped into the halls, as Grimfax told them to reach Zane that they needed to destroy Vex's crystal.

As they traveled, doubts were brought up, as Grimfax believed Vex wouldn't see them coming. However, Vex had anticipated this and had the soldiers while Lloyd ran off to confront Zane. Assuming his animal form, Kataru engaged the soldiers.

While trying to fight off the Blizzard Samurai, Kataru ends up restrained before Vex orders him and Grimfax sent back to the dungeon.

After Zane regained his memories and destroyed his scepter, Kataru, along with the freed warriors, the rest of the ninja, and Krag, show up at the throne room, where he reunited with Akita with a big hug. He and his sister later joined several warriors to carry out Vex's punishment, he watched as Vex was banished to the outskirts of the land.

Later, he witnesses the ninja go back to Ninjago. After Lloyd left, Kataru comforted his sister who was sad to see him go, and suggested they roam the realm in their animal forms.

The pair were very close, as they often played together in the village. Kataru was supportive of her, as he revealed that he wanted to spend time with her after they chose a form and assured her after Vex visited. When they both achieved their forms, the siblings were elated and acted on their promise to play before they decided to head home.

After Vex and the Ice Emperor attacked he defended his sister from Boreal but was warned to retreat. However, he didn't heed her warning and was captured as a prize of the attack.

It was shown in "A Fragile Hope," that he was under the impression that she was gone like his village. However, he learned from Lloyd that not only was she alive but she was unaware of his fate. Kataru was very relieved to learn of his sister's survival.

In "Awakenings," Kataru and his sister were reunited and he was happy to see her before happily hugging her. The siblings reconnected and Kataru comforted her on Lloyd leaving.

He first hears of him in "An Unlikely Ally," as Vex told him that the latter was approaching the castle.

In "A Fragile Hope," while in the dungeon, Kataru meets Lloyd formally. He offers friendship while they are detained, as Lloyd realizes he’s Akita's brother whom she thought was dead and vice versa, in the Ice Emperor's dungeon. Lloyd reassured him that his sister is still alive, to his relief. Very soon, the pair are liberated by Grimfax and allied to overthrow Vex and his master.

During "Once and for All," Kataru and Grimfax then create a diversion for Lloyd to reach Zane, showing his faith in Lloyd.

In "Awakenings," because of their efforts, recovered his memories and destroyed his scepter. In the process, Kataru was reunited with his sister because of Lloyd's efforts. He was present at the ninja’s departure and had been on good terms with Lloyd before his departure.

Shortly after the ninja left, Kataru believes he wouldn't see him again and tries to cheer his sister up.

Zane was Kataru's captor while the former was the Ice Emperor.

In the flashback of "The Last of the Formlings," Kataru met Zane when he attacked the Formling Village under Vex's coaxing by using Boreal, leaving him and his sister Akita the only survivors with Kataru brought to the dungeons of the Castle of Ice where he spent decades inside.

Upon learning that he used to be good in "A Fragile Hope," Kataru sided with Lloyd to try and destroy his scepter, which succeeded with Zane recovering his memories and destroying it.

In "Awakenings," Kataru and Zane may have put their differences aside since it was Vex's fault that Zane had frozen his village.

As seen in "The Last of the Formlings", the Ice dragon was responsible for freezing his village. Kataru attacked the dragon when it moved to strike at his sister. His actions caused the dragon to attack him, resulting in his capture and separation from his sister.

During "A Fragile Hope," Kataru voiced his dislike of the dragon when he brought up how it took him as a prize.

It was shown in the flashback of "The Last of the Formlings," that they first met when Vex came to Kataru and Akita’s Choosing Ceremony. Kataru had heard stories of Vex being unable to achieve his form but was disgusted at him threatening the villagers. He reassured his sister that she will not end up like him and will find her form. When the village came under attack, Kataru stood against Vex and his master but was captured by their dragon.

As seen in "An Unlikely Ally" and "A Fragile Hope," Kataru was held captive by Vex and refused to join him, despite the possibility of freedom. In response, the general didn’t hesitate to mock Kataru on his situation of being imprisoned in a cell.

In "Once and for All," Vex is revealed to have told Zane the Formlings were evil war-loving creatures to get him to attack.

During "Awakenings," Vex defeated Kataru and Grimfax, having the pair re-imprisoned and mocks their situation. Unfortunately, Zane regained his memories and released all those trapped in ice, including the Formlings. After his defeat, Kataru was present when Vex was banished to the outskirts of the Never-Realm.

In "A Fragile Hope," while in the dungeon, Grimfax talks with Lloyd, asking if he can really get to Zane. After Lloyd confirms this, the Blizzard Warrior frees him and Kataru.

During "Once and for All," Kataru and Grimfax work together to fight off Vex and his soldiers so Lloyd can free Zane.

In "Awakenings," the two put up a valiant effort but they are to feed it placed in the dungeon. Fortunately, their efforts were just enough to get Zane to regain his memories and freed Never-Realm of its curse.

Being an older brother, Kataru is shown to be kind to his sister, and would often reassure her of her doubts or comfort her by suggesting they roam the realm in their animal forms. He was protective of her, as he defended her when the village came under attack by the Ice Emperor. He was also relieved to hear that she was still alive after all the time he was locked up. During the reunion with his sister, Kataru immediately ran to hug her happy to finally see her again for the first time in decades. After Lloyd’s departure, he comfort his sister by taking her to the woods to enjoy the peace with their animal forms.

After finding his animal form, Kataru gained confidence and bravery as he attempted to fight back against Boreal.

During his decades of being a prisoner of the Ice Emperor, Kataru became stubborn and pessimistic, such as when he outright refused Vex's offer, and didn't believe Lloyd about Akita's survival at first.

According to Akita, he may be somewhat lazy, as he is "loud, always hungry, and sleeps half the year." 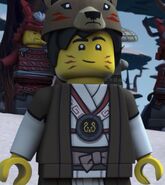 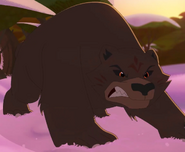 Kataru and Akita in 2D animation.