“We took a sacred oath to keep the Storm Amulet safe from those who would seize it. We harnessed the power of lightning, and became one with the storm. Our forefathers kept the oath, and their forefathers, all the way back to the beginning.”
— Mammatus to the ninja, "The Keepers of the Amulet"

Before the creation of Ninjago

The Keepers of the Amulet
71745 Lloyd's Jungle Chopper Bike

The Keepers of the Storm Amulet of Wojira (also referred to as the Keepers of the Amulet or simply Keepers) are an ancient native tribe of islanders that have storm powers and guarded the Storm Amulet, which was given to them by the First Spinjitzu Master before the creation of Ninjago to protect the world from Wojira. They inhabit an island hidden in the storm belt.

Long before time had a name, Wojira controlled the Endless Sea by using the sources of her power, the Amulets of Wojira. At this time lived in Ninjago two species of inhabitants were terrorized by Wojira and her power, the Merlopians, who lived under the sea, and the islanders, who lived on a small island. When the First Spinjitzu Master entered the realm and saw the chaos that Wojira was causing, he allied with the islanders and Merlopians and fought together against Wojira. When Nyad defeated Wojira and the seas calmed down, the First Spinjitzu Master gave the Storm Amulet, one of the two Amulets of Wojira, to the islanders to guard it from Wojira and any outsider who would wish to steal it, and the Keepers kept the oath.[1]

When the Keepers realized that Wojira was awake, they had no choice but to offer sacrifices to her so they can keep her submissive. Unbeknownst to them, they were actually offering gold and their resources to Ronin, who used a boat that was made to resemble the sea serpent.[2]

The Keepers were able to electrocute and capture the ninja and take them to their village. The Keepers took them to their leader, Mammatus, who explained the history of the Storm Amulet and their sacred oath about protecting it. They were then sentenced to become their prisoners forever.

The Keepers threw the ninja into a cell and took Jay somewhere else in the village. When they tried to escape, they electrocuted them. Later on, they were being chased or were chasing Zippy, giving the ninja time to look for Jay. However, they were electrocuted again by Keepers after Clutch Powers tried to steal the Storm Amulet. They were with Mammatus when they sacrificed Jay.

After the ninja failed to rescue Jay, the Keepers confront them again and promised that they'll sacrifice them to Wojira if she returns. However, after realizing that they sacrificed Jay to a fake Wojira, they make amends with the ninja.

Jay opens the hatch of the Hydro Bounty to many Keepers holding spears to his head until PoulErik greets him. After the Keepers all take him and the others to their village, they realized that Kalmaar intended to take the Storm Amulet to awaken Wojira and attempted to prepare for battle. However, the ninja stated that they need to take the amulet far away from the island as possible due to Kalmaar's forces being stronger. After being convinced, Mammatus gave Nya the Storm Amulet, passing the Keepers' oath to protect the Storm Amulet to her. However, Mammatus and the other Keepers were soon surprised once they realized that the amulet was a fake.

All Keepers are very reminiscent of humans, except for the color of their skin, which is a purple-pink radiant color. However, it is depicted as lavender in the flashback in "Master of the Sea," which might mean they originally had lavender skin before they started using Storm. They all also have yellow-orange eyes. On their skin, especially on the face, they have various characters resembling the Jungle Dragons painted in gold, white or purple. Their very distinctive feature is the large yellow teeth, which are usually sharp, except for two large teeth that come out of their mouths sideways. They are also gray around and between the eyes. They all have black hair color and wear hairstyles with their hair tied, although some are bald. As clothing, they wear simple straw or wooden clothing with green crystals except for the chief, whose clothing is gold. Some of them have a covered chest, others have the upper half of the body exposed. The chief also wears a large gold crown inlaid with crystals.

Female Keepers are very similar in appearance to males and do not have lashes or distinctive lips like most females in other cultures. The only distinguishing feature in this case is the division of the clothes into a bra and shorts.

The main representative of their tribe is the Chief, who as king rules over them. This rank is hereditary which means that since the Battle of Nine Days, one family line of chiefs has ruled. As a chief, Mammatus also has a personal servant who carries things for him, such as a footstool or his staff. Being the leader of his tribe, the chief wears a gold armor instead of straw clothes, a cape, and a large gold crown inlaid with crystals on his head. However, this way of dressing for the chiefs developed later, as the chief who took over the Storm Amulet did not wear any of it.

The second-in-command is the second highest rank among the Keepers. It is always just one islander who performs the most important tasks for the Chief. He is not marked with any special element and can look like any other islander.

The guard is another rank among the Keepers. Their task is to guard the Storm Amulet and perform tasks assigned to the Chief. They are marked with a high ponytail and a shaved rest of the head.

The Thunder Keeper is another rank among the Keepers. Their role is ritual dance and singing, which they take very seriously. They also call out to the storms within the storm belt by doing their rituals to prevent any outsider from entering the Island of the Keepers.

The Rumble Keeper is another rank among the Keepers. Their role is similar to that of the Rangers, but the Rumble Keepers are also gardeners who preserve the natural balance of their island.

The servant is probably the lowest rank among Keepers. They perform various inferior tasks and must constantly bow to their Chief.

The Keepers culture seems relatively simple, as they have lived on a hidden island in the Endless Sea since the beginning of time, where almost no humans have ever arrived. As a result, their culture did not develop much and remained at a very outdated level. Nevertheless, they were able to build their village on trees and create a zipline system that was able to transport them there from the docks.

As they were commissioned by the First Spinjitzu Master to protect the Storm Amulet of Wojira, they did so for ages and did not let anyone on their island.

Although mostly depicted as dangerous islanders, they also harvested and had a lot of fruit to eat. Most Keepers aren't much fun either, as PoulErik pointed out in "The Storm Amulet." They are also capable of laborious manual work, such as carving sculptures out of stone. Rumble Keepers are also largely gardeners who take care of the vegetation of their island.

There were also gold coins in their village, which they probably used as currency and sacrificed to a fake Wojira when she appeared.

Although they were actually afraid of Wojira, they showed their fear with immense respect and many sacrifices to get rid of the serpent.

They have some traditions, such as the tradition that no one who sees the Storm Amulet can ever leave their island.

Their other tradition is that the Rumble Keepers can participate in a ritual challenge and become Thunder Keepers if they prove themselves worthy in the challenge.[3]

No holiday for ninja!

Out of the dungeons and onto an island! But the ninja don't get a break because these new baddies are ready to bring the thunder - literally! They can cast bolts of lightning![4]

The mysterious island is home to the hidden Keepers of the Amulet. Led by Chief Mammatus, they are desperate to keep nosy heroes away from their secrets. But what are they protecting? And what powers does the amulet have? All will be revealed...[4]

Only old explorers' books mention the mysterious island and its inhabitants. They are said to be able to control the weather and will protect their island at all costs. No one has set foot on the island so the islanders remain a mystery![5]

Trapped on an island in a stormy sea, the ninja are at mercy of the Keepers of the Amulet! What does this ancient tribe have to to with the First Spinjitzu Master? And are they really working in league with a giant sea serpent?

The Keepers of the Amulet!

We protect our island with an entire storm front filled with purple lightning. If anyone makes it onto the island, they'll be greeted by Rumble and the Thunder Keepers - so ninja you'd better...
...STAY AWAY!
[6]

Keepers of the Storm Amulet

This amulet is the most important artefact of this island tribe. Protecting it is their life! Find out more about them, their ranks and their personalities…[7]

Chief Mammatus and The Keepers normally spend their time protecting the Storm Amulet, but now they're here to prove they can hold their own in BRAWLS! 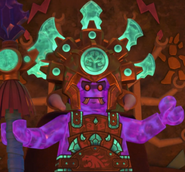