Ninjago Wiki
Register
Don't have an account?
Sign In
Advertisement
in: 2021, 2021 vehicles, Ninjago: Masters of Spinjitzu,
and 7 more

View source
watch 01:33
Wiki Targeted (Entertainment)
Do you like this video?
Play Sound
“
…But still lightning fast! They are using the spears to catch lightning for their boats!
— Nya in Island Challenge!
„

The Keepers of the Amulet
71741 Ninjago City Gardens (mini model)

Intact
Destroyed (some)
The Keepers' catamarans are boats that belong to the Keepers. They can be empowered by the lightning used by the Keepers and connect to the other Keepers' boats.

Master of the Sea (flashback)

The Keepers and the First Spinjitzu Master rode some of the catamarans to fight Wojira during the Battle of Nine Days.

All of the ninja, except Lloyd, were captured by the Keepers and was exiled across the sea to another part of the uncharted island to the Keepers' Village.

Twitchy Tim was on a catamaran and used it to save the ninja. Eventually, the ship crashed into Ronin's monster, making both boats sink.

Skipper the ninjas’ awesome catamaran in an amazing sea fight against the Keepers! Go into attack mode and fire your spring-loaded shooters. Woah! The Keepers’ powerful battle catamaran, which splits into 3 separate boats, one with a prison, tries to sink you with its sharp blades and deadly shooters. You must triumph in this nautical battle to claim the precious storm amulet.[2]

The powerful ships of the Keepers use lightning energy to go faster.[3]

Don't be fooled by the modest size of this boat! It's super-fast with six shooters. It also has room for three villains and a prison for careless heroes![4] 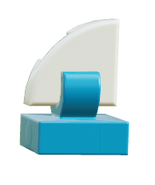