View source
watch 01:25
Jurassic World: Dominion Dominates Fandom Wikis - The Loop
Do you like this video?
Play Sound
“This is our home, Son. You might have once turned your back upon it, but I never will.”
— Khanjikhan to Nadhakhan, "Enkrypted"

Michael Antonakos
Khanjikhan was Nadakhan's father and the ruler of Djinjago prior to its destruction.

At an unknown point in time, Khanjikhan married an unnamed woman and became the Djinn King, and inherited the Djinn Blade as a result. Afterward, he had a son, Nadakhan. However, when Nadakhan left Djinjago to explore Ninjago and became a pirate, Khanjikhan disowned his son, no longer welcoming him back in his home realm.

Upon his son's return to Djinjago alongside the Sky Pirates, Khanjikjan noted the poetic fittingness of his coincidental arrival as the realm began to collapse. Upon being asked why the realm was collapsing, he explained that, due to the Preeminent's death, and because Djinjago was the Cursed Realm's sister realm, this resulted in the collapse of their home. He then proceeded to give the Djinn Blade to his son, officially making him the Djinn King and telling him to avenge the Djinn, and stayed behind as the realm collapsed, presumably dying as a result.

As a result of Jay's wish erasing the events of the season, Khanjikhan would never give the Djinn Blade to his son in the first place, resulting in the artifact's destruction.

As Khanjikhan was a legendary figure[1] and a notable individual in djinn history, a statue of him somehow ended up in Borg Tower,[2] and various statues were created by his son in Djinjago before the timeline was reversed.[3] 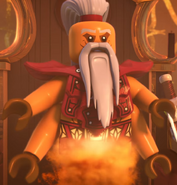 Statues of past kings of Djinjago, one of which is Khanjikhan

A golden statue of Khanjikhan as seen within Borg Tower.