Kingdom Come is the sixth episode in the fifth season of LEGO Ninjago: Masters of Spinjitzu, and the 50th overall in the series. It premiered on Cartoon Network in the United States on July 6, 2015.

In Cloud Kingdom, a realm where destinies are written, the Ninja must get the Sword of Sanctuary, a powerful relic that can see past the traps surrounding the tomb of the First Spinjitzu Master - but tensions are high as Morro's escape from the Cursed Realm has put the future in chaos, and they won't give the Sword to the Ninja unless the Master Writer meets them personally.

Atop the Wailing Alps, Bansha, Morro, and Soul Archer sulk in their failure to get through the Blind Man's Eye. Soul Archer advises their leader to be patient, though Morro points out that the Ninja will have the upper hand if they get the Sword of Sanctuary first. While he struggles to fight off Lloyd, Bansha claims to be in contact with someone willing to let them into Cloud Kingdom the back way.

At the gate of Cloud Kingdom, the Ninja are greeted by Fenwick, who reveals that the inhabitants of Cloud Kingdom write the destinies of Ninjago, such as deciding Lloyd would be the Green Ninja. He shows them into the city, noting that Morro is likely not far behind.

Back aboard the Destiny's Bounty, Nya, Wu, and Ronin question Ghoultar, intending to learn what Morro is after in the Tomb of the First Spinjitzu Master. However, the ghost refuses to say anything. Ronin threatens to use his Aeroblade, but Wu advises another approach. Misako then enters and assures them that the Ninja are far ahead of Morro. Wu decides to use the time to continue Nya's training, and leaves Ronin in charge of their prisoner.

Fenwick shows the Ninja inside the library, explaining that Cloud Kingdom is just one of Sixteen Realms that are parallel to Ninjago. Instead of distractions like television or video games, Cloud Kingdom focuses on writing destinies, such as Lloyd becoming the Green Ninja or Zane's voice returning back to normal, which it does. Jay notices a writer writing about Dareth, though accidentally spills ink over the paper, causing the Brown Ninja to run into a cement truck. Fenwick then reveals that they are not allowed to choose sides, and thus cannot guarantee Kai's promise to save Lloyd. However, he also reveals that Morro defied destiny as they had intended he remain in the Cursed Realm. This has caused events to happen outside of the writers' control, such as Cole becoming a ghost. Kai demands the Ninja be given the sword so they can fix things, but Fenwick insists that the Master Writer wants to see them first.

Meanwhile, Ronin has turned on the radio, and Ghoutar happily dances to it. The ghost, however, brings up the mercenary's deal with Soul Archer and how convincing he was in the Samurai Cave. Ronin quickly quiets him, promising that he will make good on his end of the deal.

In Cloud Kingdom, the Ninja board a boat with Fenwick, who explains that Morro is after the Realm Crystal, which is buried in the Tomb of the First Spinjitzu Master, for his master, The Preeminent, queen of the Cursed Realm, who seeks to curse all sixteen realms. They soon arrive at a small temple, and Fenwick ushers them inside, promising that the head writer will be there shortly.

Inside the temple, the Ninja find a room filled with toys. Instead of the Master Writer, they are greeted by a large, angry, bear-like creature, which attacks them. Meanwhile, Fenwick greets Bansha, Morro, and Soul Archer, having made an alliance with them, since he believes they cannot be stopped. He agrees to show them to the Sword of Sanctuary.

The Ninja manage to escape the room with the bear, thanks to Cole using his abilities as a ghost to transform himself into the lock to the door. A student who had noticed Fenwick's betrayal directs them to the temple where the Sword of Sanctuary is kept. However, Morro has already obtained the Sword, and the Ninja are unable to defeat him, since he can predict their every move.

Morro escapes onto a Cloud Kingdom skiff, transformed by Bansha and Soul Archer. The Ninja commandeer another skiff, but their pursuit is delayed by the bear-creature. However, the student from before comes to their rescue by finding Fenwick's destiny scroll and writing on it, causing the bear-creature to chase Fenwick instead. Both skiffs leave Cloud Kingdom through the Blind Man's Eye, emerging back onto the Wailing Alps.

Aboard the Destiny's Bounty, Misako nearly convinces Ghoultar to talk by feeding him Puffy Pot Stickers. However, they dropped a set of keys near the cage when they were contacted by the Ninja, who inform them of Morro's plans. The group tries to intercept the ghost skiff with the Destiny's Bounty, but are attacked by Ghoultar, who has freed himself with the keys. Nya throws Ghoultar overboard, and he lands on the ghost skiff, which is weighed down due to all the Pot Stickers that he ate.

While the rest of the Ninja board the Destiny's Bounty, Kai catches up with Morro's skiff and duels the Master of Wind. Morro overpowers him using the Sword of Sanctuary and prepares to deliver the final blow, but is stopped by Lloyd, who has temporarily regained control of his body. Kai takes the Sword and uses Airjitzu to return to the Destiny's Bounty right as the skiff goes over a cliff. The Ninja now only need to find the Tomb of the First Spinjitzu Master. Ronin, however, reminds everyone they don't know where the tomb is, making everyone mad, and causing Nya to say he ruins everything. 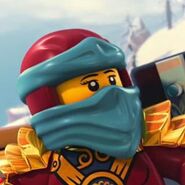 Add a photo to this gallery
Retrieved from "https://ninjago.fandom.com/wiki/Kingdom_Come?oldid=370826"
Community content is available under CC-BY-SA unless otherwise noted.