View source
watch 01:25
Jurassic World: Dominion Dominates Fandom Wikis - The Loop
Do you like this video?
Play Sound
“Nothin' for you.”
— Krait to Garmadon, "Versus"

Brent Miller
Krait was an Anacondrai cultist who worked for the villainous Master Chen, and helped him attack Ninjago after they were turned into Anacondrai.

NOTE: In order to fill out the cultist ranks, multiple copies of several Kraits appear in the series. As such, any notable appearances of an Anacondrai cultist with Krait's design will be placed here, for convenience.

On the day before the Tournament of Elements began, Krait was in New Ninjago City and observed Kai defeating Kruncha at Yang Tavern. Krait later entered Chen's Noodle House with Eyezor and Chope to rob the register. After being defeated by the ninja, the three thugs left out the back. They would later be seen aboard the ferry to Chen's Island, patrolling alongside Clouse throughout the voyage.

Krait was among the Anacondrai Cultists who witnessed Karlof's elemental power being withdrawn.

He worked in the cafeteria serving breakfast to the Elemental Masters. When Garmadon arrived, Krait refused to give him creamy biscuits for betraying Master Chen before piling many biscuits onto Jay's plate.

The Anacondrai cultists watch as the Elemental Masters compete in the Thunderblade round.

Krait tries to capture Cole as he causes mischief in the factory.

An Anacondrai cultist was present in the noodle factory when Zugu ordered it to be locked down, and after shutting off the machines, left the area. He soon returned with Sleven to throw Dareth into the factory to work. The cultist then helped Clouse capture some of the Elemental Masters, including Shade.

Krait watched as Chen steals the remaining Elemental Masters' powers. While guarding the outer perimeter of the temple, Krait was sleeping on duty until Eyezor caught him doing so, and would be forcibly berated by the one-eyed general before he turns his attention to Kapau and Chope, who are talking. He attended the ceremony in which Chen steals Lloyd's power, but had to fight back the Elemental Masters when Kai and Skylor betrayed Chen.

After the Cultists broke into Kryptarium Prison, they fought the ninja to obtain Pythor and went back to their campsite after successfully doing so.

They would later participate in Chen's attack on Jamanakai Village and his overall invasion of Ninjago now that the ninja and their allies were separated into various areas.

Krait and the rest of Chen's army continued their attack on Ninjago and fought against the Elemental Masters at the Corridor of Elders. Unfortunately, Garmadon unleashed the spirits of the Anacondrai Generals, who banished the imposter cultists to the Cursed Realm.

While he is not seen nor mentioned in the episode, Krait was imprisoned in the Cursed Realm, which is revealed to be the stomach of The Preeminent. When Morro and his army of ghosts free The Preeminent, they attack Stiix and its civilians. Eventually, the Preeminent heads out into the Endless Sea but is knocked over by a massive tidal wave created by Nya, killing the beast. As a result, the Cursed Realm is destroyed and all its inhabitants are killed, including Krait.

Krait has a large Anacondrai skull atop his head. He has a white upper half on his head, but the rest of it is yellow. He has various purple markings on his head, and red markings on his eyes. Krait has dual Anacondrai Serpentine markings on his chest, and a dark red and black belt with golden studs. The belt also has Anacondrai skulls on it. He has a dark red waistline and dark red upper legs. His legs have a rope of silk on the left, with two teeth-and-daggers on his leg. On his right leg, he has a rope made of bones. His lower legs are purple with silver chains, and his feet have claw-prints on them. Krait also looks very muscular, like his other companions.

Krait is one of Master Chen's henchmen who has been transformed into a human-Anacondrai hybrid. He is a ruthless fighter, thoroughly committed to the cause of Chen. The ninja will have their hands full stopping him and his fellow warriors.[1] 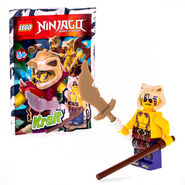 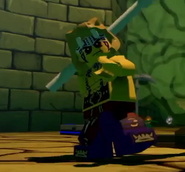