Ninjago Wiki
Register
Don't have an account?
Sign In
Advertisement
in: Ninjago: Masters of Spinjitzu, Locations, 2015,
and 18 more
English

You may be looking for the Ninjago City Prison.

“Kryptarium Prison. Home of Ninjago's worst of the worst.”
— Garmadon, "The Greatest Fear of All"

The Greatest Fear of All
70591 Kryptarium Prison Breakout

Hounddog McBrag
Kryptarium Prison is a large facility that houses many convicted criminals. Located in the Sea of Sand and operated by Warden Noble, Kryptarium contains some of Ninjago's most dangerous culprits, such as several Skulkin, Soto, a Giant Stone Warrior, Nindroids, the ninja (formerly, in an alternate timeline), the Sons of Garmadon, Aspheera, and formerly Lord Garmadon himself.

During the Second Serpentine War, the ninja went to Kryptarium to find Pythor, who was the sole means of allowing Chen's army to be Anacondrai permanently. While there, a fight soon broke out when Kapau and Chope raided Kryptarium. The ninja battled the Anacondrai warriors as well as many inmates before Pythor was ultimately captured. Sometime later, the ninja were framed for a series of crimes they didn't commit and were imprisoned in Kryptarium. They then allied with Captain Soto, who helped them escape. After Jay made his final wish, Soto was put back in Kryptarium and the ninja were never imprisoned there, to begin with.

After the events in the Dark Island Trilogy, the Sky Pirates (excluding Nadakhan who was stuck in the Teapot of Tyrahn) were arrested and put into Kryptarium.

After the Sons of Garmadon resurrected Lord Garmadon, they were arrested and put in Kryptarium. However, after Garmadon freed Harumi, she freed her allies and took over the prison. That night, Garmadon fought and defeated Lloyd in a brutal battle that took place in Kryptarium.

After Garmadon's takeover of Ninjago, the Sons of Garmadon used Kryptarium as a place to send anyone who opposed Emperor Garmadon. Those who got caught were Ronin, Police Commissioner, Simon, Tommy, Noble, Karlof, Neuro, Tox, Griffin Turner, Mr. Pale, P.I.X.A.L., Misako, and Bolobo. Those who didn't get caught were Lloyd, Nya, Skylor, Dareth, Mystake, and the Postman. They later broke out upon hearing the ninja return and took it back, sending the Sons of Garmadon and Garmadon himself back to Kryptarium.

Shortly after Garmadon's defeat, a maximum-security cell known as cell one was built somewhere in Kryptarium Prison, which was created for the sole purpose of imprisoning Garmadon. Later, after the Oni invade Ninjago, Lloyd and the ninja reluctantly agree to free Garmadon so he can help them stop the Oni.

When the ninja defeated Aspheera, she was imprisoned in the maximum-security cell they formerly used for Garmadon.

After the ninja were banished to the Never-Realm, The Mechanic and Ultra Violet escaped only to be recaptured, along with Fugi-Dove, by P.I.X.A.L.

However, the Mechanic was able to escape again but was recaptured before Unagami hacked into the security systems and freed all the prisoners.

At some point in time, prior to the defeat of the Overlord, Kryptarium Prison was built to house Ninjago's most dangerous criminals, and at the same time, rehabilitate them as well.

Noble would eventually quit his principal job at Darkley's Boarding School for Bad Boys and become the prison's warden, becoming dedicated to the rehabilitation of the prisoners.

In an attempt to figure out a weakness of the fake Anacondrai, the ninja visited Kryptarium in order to interrogate a shrunken Pythor. However, the prison was infiltrated thanks to the efforts of Kapau'rai and Chop'rai, who had sneaked in through a laundry van,[1] and several of the inmates escaped thanks to No-Eyed Pete using a fallen spear to open all of the cell doors. However, with the help of the ninja, the inmates were all detained, save for Pythor, and the prison was eventually repaired.

Cole went to Kryptarium to ask the inmates to help them defeat Chen's Anacondrai army.

Shortly after Ronin stole the ninja's memories, he sent his goons to Kryptarium to get the map to the Inky Lemonberry from Hibiki. However, the ninja soon arrived seeking Hibiki's help as well and sent the goons in retreat.

After being captured by Ronin, the ninja were sent to Kryptarium, and due to their powerful status, were detained in the section for the most dangerous criminals. There, they were confronted by several angry inmates, including the Mechanic. However, the prisoners were quickly placed into their cells, and at lunch, the ninja managed to learn from Soto the weakness of a Djinn; the Tiger Widow venom. Following a brief skirmish with the inmates, the ninja agreed to help Soto escape the prison in return for the location of Tiger Widow Island.

As a result of Jay's final wish erasing the events of the season, Kryptarium regained its escaped convict, Soto. Some time afterward, Frakjaw later escaped his imprisonment.

After being defeated by the ninja at the Temple of Light, the Sky Pirates were sent to Kryptarium Prison for several crimes such as kidnapping and attempting to plunge Ninjago into darkness.

Following their defeat, Harumi and several members of the Sons of Garmadon were arrested by the Police Commissioner. They were then taken to Kryptarium Prison for their actions.

Harumi and a resurrected Garmadon broke into Kryptarium and took it over, freeing the Sons of Garmadon. Garmadon used the basketball field to practice on a few members. Harumi later had the cameras broadcast the fight between Lloyd and his father to Ninjago.

When Chopper Maroon informed the guards they need all hands on deck because the original ninja and Wu were back, Karlof managed to break Ronin, Griffin, and himself out to help break the other prisoners of Ultra Hunt out. After taking the prison back and Garmadon lost his power, the Sons of Garmadon were sent back alongside Garmadon.

Lloyd goes to visit his father, who is in a very special solitary confinement cell in a high-security wing built for the single purpose of imprisoning Garmadon. He demands to be released for the upcoming threat, but Lloyd refuses. He later comes back with the others when the Oni attack Ninjago and accept his offer to release him.

While the ninja are in the Police Commissioner's office trying to find a quest, Jimmy comes in to report on a riot in Kryptarium. The ninja rush to the scene only to be a recording of the fight. While there, they visit Killow to see if he has any evil schemes, but they bored away when he shows the ninja his painting.

After her defeat by the ninja, Aspheera is arrested and locked away in Garmadon's old cell of the prison. She is visited by Wu and she tells him that Zane was not killed but banish to another realm.

While incarcerated, The Mechanic learns of the ninja leaving, and relays it to Ultra Violet before they conspire to break out of Kryptarium, joined by self-proclaimed villain Fugi-Dove, only to be recaptured by P.I.X.A.L., who installed sensors in case of prison escapes.

As Noble inspects the prisoners in their cells, Unagami soon hacked into the security system and opened all the cell doors before the Mechanic has some of the prisoners, including Captain Soto and Ultra Violet, come with him, rejecting Fugi-Dove's request at the same time. The prisoners head to Borg Tower, where the Mechanic had planned to retrive the original Prime Empire arcade cabinet, however, the prisoners were stopped by the ninja, who entered the game, besides Zane and P.I.X.A.L., who escaped the tower with Cyrus Borg and the Prime Empire motherboard, leaving the prisoners behind.

It is presumed that most, if not, all the inmates were recaptured afterward.

The Kryptarium Prison is a high-security prison located in the Sea of Sand, designed to hold the worst of the worst. Although this forbidding facility is intended to be escape-proof, the guards are unarmed, as part of an effort to create an environment of trust. Here Warden Noble tries to foster “an environment of encouragement”. When the ninja visit the Kryptarium for the first time, it is to find Pythor.[2] 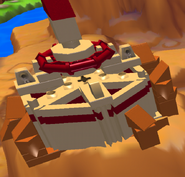 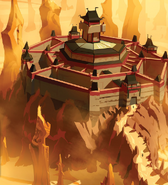 Concept art from Shadow of Ronin.