View source
watch 02:56
Doctor Strange in The Multiverse o Madness - The Loop
Do you like this video?
Play Sound
“Don't mind them, they all get a little grouchy when they don't get their meat.”
— Noble to the ninja, "Enkrypted"

The Greatest Fear of All
70591 Kryptarium Prison Breakout

This section is a stub. You can help expand this section by adding some information.
The following events were undone due to Jay's final wish, and thus, did not happen in the current timeline.

This section is a stub. You can help expand this section by adding some information.
The following events occurred after Jay made his final wish, and thus, happened.

Harumi greeted the rest of the S.O.G. and released them from their cells. Meanwhile, Warden Noble allowed them to be free and is kicked out after Harumi stated that they would stay for longer.

In Kryptarium Prison, Griffin, the Police Commissioner, Karlof, Misako, and even Ronin are seen locked in cells. Ronin, who shares his cell with Misako states that he hopes Lloyd can pull through; to which Misako confirms that the Green Ninja can. Unconvinced, Ronin simply replies, "Easy for you to say; you're his mother."

In Kryptarium Prison, a grunt from the Sons of Garmadon frantically informs his comrades that the ninja have returned to Ninjago. Overhearing this, the imprisoned civilians and Elemental Masters regain hope and desire to help the ninja. They start shouting "The resistance never quits." since they are now inspired to break free. Ronin, Karlof, and Griffin Turner cause a riot in the prison before escaping their cell and releasing their friends from the cells.

The inmates cheered on as the prison guards struggled to keep the Giant Stone Warrior contained. Cole entered Kryptarium Prison with his Earth Driller and only made matters worse when he released Killow from his cell. In the end, both were defeated and placed back in their cell which resulted in a boo from the inmates.

The ninja entered Kryptarium Prison believing a fight has occurred, but it was only a recording as the inmates were learning to resolve a conflict.

All Kryptarium inmates including The Mechnaic, Ultra Violet, and Captain Soto were released by Unagami. They are penetrated Borg Tower in an attempt to retrieve the original Prime Empire arcade cabinet, but failed to do so as all the ninja entered Prime Empire while Zane, Cyrus Borg, and P.I.X.A.L. stole the Prime Empire motherboard upon their escape.

After the inmates escaped from Kryptarium Prison. Ronin was hired by the Ninjago City Police to capture them. However, Ronin decided to have them help him steal the Keepers' resources. So they built a ship that resembled Wojira and rode into the Keepers' Village every week to receive tribute. 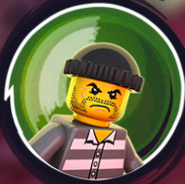