The English version was never printed, despite it having been the language the book was originally written in.[2]

Discover the secrets behind Garmadon’s past and his rise to power as a super-villain! The world of Ninjago expands with exclusive stories and deluxe artwork that tie in with the latest LEGO® NINJAGO® TV series. 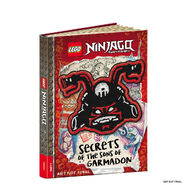 German cover
Add a photo to this gallery

Retrieved from "https://ninjago.fandom.com/wiki/LEGO_Ninjago:_Garmadon_Rulez!?oldid=448861"
Community content is available under CC-BY-SA unless otherwise noted.