“It is a heavily armored, six-wheeled mobile command vehicle. I call it the Land Bounty.”
— P.I.X.A.L. to the ninja, "A Rocky Start"

Destroyed
The Land Bounty (also known as the Dune Bounty[1]) was one of the ninja's vehicles that P.I.X.A.L. built after the Oni's invasion.

Shortly after the end of the Oni's invasion, P.I.X.A.L. had been working on the hangar bay for six months. She also built the Dirt Bike and the ATV in this time with it. However, the ninja did not notice anything, due to them has gotten lazy during construction.

The ninja were planning to go to the Desert of Doom on a quest and before they did, P.I.X.A.L. told them about the vehicles she built. After exploring the hangar bay, they took the Land Bounty as well the Dirt Bike and the ATV into the Desert of Doom but they forgot to take the manual. After some traveling, The ninja parked their vehicles in an oasis where they relaxed until they encountered Beohernie. They tried to escape him, but the beetle ingested a critical engine part that the Land Bounty could not run without it.

Zane gets eaten by the Beohernie and was able to get the engine part back. This allowed the ninja to outrun him and reach the pyramid.

After P.I.X.A.L. saved the ninja from the pyramid using the ShuriCopter, they used the Land Bounty to ride to Ninjago City and stop Aspheera.

The ninja rides their vehicles including the Land Bounty into Ninjago City and saved Fred Finely by defeating an Elemental Cobra which nearly devoured him.

Along with the Land Bounty, The ninja arrive with their vehicles to save the Police Commissioner and his crew when they were surrounded by Elemental Cobras.

Inside the Explorer's Club, Shippelton, Smythe, and Underhill were interrupted by Lloyd, Nya, and Zane when the Land Bounty and the ShuriCopter landed outside the building.

After getting the second Scroll of Forbidden Spinjitzu, Lloyd and Nya climbed aboard the Land Bounty and headed to the Monastery.

On their way to the Monastery, Lloyd opens the Scroll causing him to say that he'll be careful in a demonic tone. After Nya felt worried, Lloyd apologies and places the Scroll down.

After the ninja defeated Master Wu, they headed inside the Land Bounty while P.I.X.A.L. stood outside to zap the vehicle into the Never-Realm.

The Bounty landed on an icy cliff and the ninja had to get out before it fell off and was destroyed.

After saving him from the Blizzard Samurai, Akita brings Lloyd to the Land Bounty's wreckage, which he uses as shelter.

In Cole's nightmare, Kai, Jay, and Lloyd made him go back inside the Bounty to retrieve the bag of tea. It eventually falls down the cliff with Cole still in it.

While wandering along in an attempt to find it, they manage to find it, and quickly seek shelter from the Frost Wolves. In the process of trying to reboot it, Nya throws out a few components (and Jay's travel pillow), before slamming the consoles in anger until they soon start-up, and they immediately drive away.

Nya was driving the Bounty to the Ice Emperor's castle when Boreal woke up and chased them down. The Bounty was destroyed after Boreal had ripped parts from it and landed unconscious underneath it.

The ninja left the Bounty to regroup, where Nya discovered that Boreal was made up entirely of ice. After discussing theories and thoughts, Boreal woke up and attacked them again. When Boreal went after Nya, Cole and Krag teamed up to throw the Bounty at Boreal to distract him, but instead he leaped into the air and tried to freeze them. The Bounty ended up being destroyed and the ninja and Krag continued to their journey to the Castle of Ice.

Join NINJAGO® ninja action figures Wu, Kai, Jay, Nya and Cole FS in their awesome armored mobile command center—Land Bounty! Steer the ninja truck across the sandy Desert of Doom and make those shuriken slicers spin. Power into battle against Aspheera and the Pyro Vipers and fire the cannon and spring-loaded shooter. Detach the flyer and launch a stud-shooting attack. Grab weapons from the Land Bounty and ride out on the quad bike. You must defeat Aspheera and take back the powerful Scroll of Forbidden Spinjitzu![2]

Wu loves to take the wheel on the deck of the Land Bounty, the ninja's latest mobile base. A cross between the flying Destiny's Bounty and the six-wheeled DB X truck, it's ideal for fighting Pyro Vipers in the Desert of Doom! 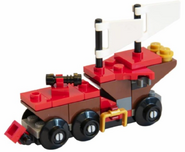 In a promotional poster for Secrets of the Forbidden Spinjitzu

In the Ethereal Divide

The Land Bounty being sent to the Never-Realm.

The Land Bounty in High Speed!

In How To Be A Ninja