View source
watch 02:24
Wiki Targeted (Entertainment)
Do you like this video?
Play Sound
“
Apparently some charlatan called Lar had passed by the village and convinced everyone that HE was the Master of Water. He had even duped a local publisher to release fake stories about his "legendary" battles.
— A section about Lar in Way of the Departed
„

Alive
Lar is a self-proclaimed Elemental Master of Water.

Lar fought Kai in the Tournament of Elements. Kai won the round by converting Lar's water into steam.

Way of the Departed 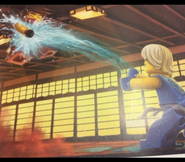