South Side of Ninjago City

Laughy's is a bar owned by Dareth, who purchased it after Wu was lost in time and his days of "fighting side by side with the Ninja." Like any other bar, it has a pool table, a dartboard, a karaoke stand, and a jukebox. According to Zane, it is on the south side of Ninjago City.

Sometime prior to the series, the Sons of Garmadon took the place over and forced Dareth to be their bartender and have new members sing karaoke to join.

After Luke Cunningham told them about their hangout, Cole (Rocky Dangerbuff) and Zane (Snake Jaguar) went to Laughy's to infiltrate the Sons of Garmadon. After Cole badly sang Glow Worm and his disguise came off, they had to move off.

With the Sons of Garmadon in jail, Dareth was able to open his bar to the public again and the Ninja decide to celebrate there. During the celebration, the Ninja learn of Garmadon's resurrection and Harumi's escape. The Ninja then go off to Police Headquarters while Dareth takes Misako and Wu to his apartment.

The Sons of Garmadon managed to take over Laughy's again a week after Garmadon was proclaimed Emperor.

Killow, Luke, and another guard head to Laughy's for karaoke after being Mind tricked by Neuro. They were later interrupted by Lloyd's speech, to which they angrily left and rushed back to help stop Lloyd.

Once the Ninja returned and liberated the city, the Sons of Garmadon were sent back to Kryptarium Prison. Dareth kept ownership of the bar, where he could enjoy it without the evil gang around.

When the cloud of darkness swept over Ninjago City, the people in Laughy's ran out to escape.

During the Elemental Cobras attack, Dareth does a commercial saying that Laughy's has reopened after extensive renovations.

Dareth can be seen greeting customers as they walked in and out of Laughy's before he left to follow Gayle Gossip.

When Zane and P.I.X.A.L. enter Laughy's to search for clues about Milton Dyer, the brother of the outlaw Fugi-Dove confronts them before they easily defeat him. 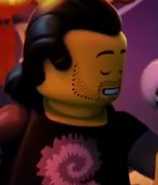 Jay Vincent in the LEGO Version.

Michael Kramer in the LEGO Version.

Before the party in Laughy's.

Add a photo to this gallery
Retrieved from "https://ninjago.fandom.com/wiki/Laughy%27s?oldid=438637"
Community content is available under CC-BY-SA unless otherwise noted.