View source
watch 01:25
Jurassic World: Dominion Dominates Fandom Wikis - The Loop
Do you like this video?
Play Sound
“Technology is every bit as important to Ninjago as the ancient scrolls in the Library of Domu.”
— Nya to the ninja in "The Digiverse and Beyond"

The Digiverse and Beyond
The Library of Domu (also known as Domu Library) is an ancient library in the Holy City of Domu[1]. It houses several important documents, including Master Kodokuna Yang's Airjitzu scrolls.

The sons of the First Spinjitzu Master traveled there in their younger years and Wu has multiple overdue books.[1]

At one point, Ronin broke into the library and stole the scroll of Airjitzu.

Weeks later, Morro visited the library seeking the scrolls but stormed out after he learned of the theft.

Wu visited Domu to try and figure out what Clouse was planning. There, he encountered Nadakhan.

Attack of the Sky Pirates (non-canon)

Nadakhan granted Wu three wishes and ultimately imprisoned him in his teapot.

Lloyd and Zane came to find out why Wu came to Domu when they discovered he was researching Nadakhan. Here, they were encountered and captured by Ronin.

Nya recalls one of the locations in Zane's memory looking like the library.

The ninja tried to virtually search the Library for a book to help them solve the Ninjigma.

Prior to Sons of Garmadon

Harumi got Hutchins to take her to the library under the guise that she simply wanted to study Ninjago history, where she read about the Oni Masks and the resurrection ritual that could summon Oni from the Departed Realm. From there, she got the idea to form the Sons of Garmadon, and bring the Garmadon she idolized back.[2]

The books Wu has on his reading list are:

Morro in the library.

Ronin steals the Scroll of Airjitzu from the library. 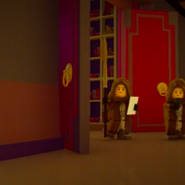 A drawing of Yang doing Airjitzu.