Ninjago Wiki
Register
Don't have an account?
Sign In
Advertisement
in: Locations, 2012, Legacy of the Green Ninja,
and 14 more
English

The Last Voyage
70594 The Lighthouse Siege

Separate Ways
Lighthouse Island[1] is a small island amidst the Endless Sea. Its only known inmate was Dr. Julien, who was imprisoned by Samukai to create vehicles for the Skulkin Army. A Leviathan was chained to the ocean floor near the island to prevent its prisoner's escape.

The prison was eventually discovered by the ninja while en route to the Island of Darkness. Upon their arrival, Zane reunited with his father, Dr. Julien, and they went inside the lighthouse where Julien explained his past and told them of the Leviathan. The ninja worked together to try and escape the Leviathan, but the massive creature tried destroying Destiny's Bounty. Fortunately, Zane freed the beast and it fled the scene, allowing the ninja to escape with Dr. Julien.

Long after Julien's freedom, the ninja found themselves in a conflict with the Sky Pirates, with the sinister djinn trapping the ninja in the Djinn Blade. When Jay and Nya were the only ninja remaining, they took refuge at Lighthouse Island, where they met Zane's clone, Echo Zane. With his help, Jay and Nya staged a battle against the Sky Pirates, but they were eventually overwhelmed and Nya was captured. Jay left the island via a portal and formed a rag-tag crew to save the ninja.

After Nya's departure, Jay secluded himself in the lighthouse, where he collects half-empty glasses of water and painting portraits of Nya or himself.

Forcing Dr. Julien to create vehicles for him, Samukai would imprison the inventor on the island, presumably sending him shipments of supplies to work with regularly. He would additionally chain the Leviathan to the island as a guard. Later, in his solitude, Dr. Julien would create Tai-D[2] and Echo Zane as company.[3]

As a result of the Starteeth attack severely damaging the Destiny's Bounty, the ninja were unable to control the ship's course and ended up crashing it on the shore of Lighthouse Island. Deciding to visit the tower, they encountered Dr. Julien, and after a joyful reunion, Julien explained the circumstances of his resurrection and how he had been imprisoned. After evading the gaze of the Leviathan, the ninja and Dr. Julien escaped the lighthouse by repairing the Destiny's Bounty and freeing the Leviathan.

While on route to Chen's Island, the ninja passed by Lighthouse Island.

Jay and Nya hid at Lighthouse Island and discovered that Echo Zane lived in the lighthouse. They had fought the Sky Pirates before Jay escaped through the Traveler's Tea and Nya was captured.

Jay returned to Lighthouse Island to recruit Echo Zane as part of the Ninja Replacements.

Lloyd had a drawing of Lighthouse Island on his board of possible locations for where the Vermillion could be hiding the missing people.

An island prison where Samukai kept Dr. Julien for years, forcing him to work on designs for Skeleton Army vehicles. It is located on a small island not far from Dark Island. The ninja arrived here when Destiny’s Bounty was damaged, rescued Julien, and in return, he repaired their ship. This was Zane’s first opportunity to see his creator in many years, and gave him the opportunity to learn more about his past.[4]

Lighthouse Island is surrounded by sharp jagged rocks, the largest of which covers the majority of the island. A steep staircase is carved out of the rock leading to the summit where the prison is constructed. Sparsely dotting the island is the Red Kelp of the West Apostle Current. 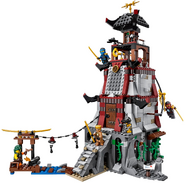 The top floor of the prison 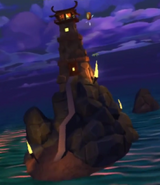