Lloyd's Sword is a weapon that is used by the Green Ninja. The sword appears as a sliver dao blade (also known as a Chinese broadsword) that has a golden tassel at the end of its handle. Lloyd uses this sword as his main weapon in The LEGO Ninjago Movie and seasons 8-10 as well as Season 13 in the series. As of Season 11, Lloyd has a Golden Sword that looks similar to this sword.

As the Green Ninja, Lloyd carries a sword, complete with ornamental tassel on the handle. Lloyd is well-trained in its use and can swing the blade so fast it can barely be seen. 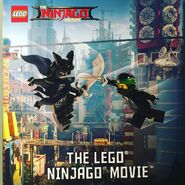 Lloyd using his sword against Garmadon in a poster 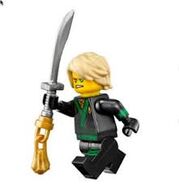 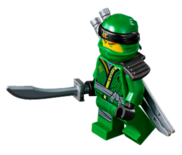 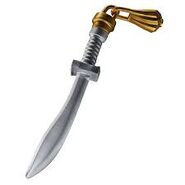 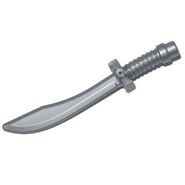 Lloyd's sword without the tassels.

Lloyd using his sword in battle

Koko wielding the sword in battle

Lloyd carrying his sword on his back

Lloyd charging with his sword.

Lloyd using his sword against Cole during training

Lloyd's sword in the weapons rack

Lloyd entering a dark area while arm with his sword

Lloyd wielding his sword in training

Add a photo to this gallery
Retrieved from "https://ninjago.fandom.com/wiki/Lloyd%27s_Sword?oldid=464544"
Community content is available under CC-BY-SA unless otherwise noted.