View source
watch 01:33
Wiki Targeted (Entertainment)
Do you like this video?
Play Sound
“
Where's my sword?
— Lloyd in "A Rocky Start"
„

Intact
Lloyd's golden sword[1] is a sword owned by Lloyd.

Shortly after the Oni's invasion, the sword was created to resemble a golden version of Lloyd's former sword.

During a training exercise, Lloyd fought Wu using the sword and was quickly defeated and pushed off the roof.

The ninja traveled around Ninjago City with their weapons including Lloyd, who brought his sword.

Lloyd used the sword to cut a rope from the Land Bounty's cannon that allowed the ninja to escape Beohernie.

Lloyd pulled out his sword to fight against the Pyro Vipers before Zane rescued him and Nya.

After being denied entry into the Explorers Club and planning to sneak through the roof ventilation, Lloyd used the sword like a chock and frozen in place by Zane's ice.

Nya held Lloyd's sword while he went off to steal the Traveler's Tea from Wu. After he got the tea, Nya gave him back his sword and he puts it behind him. When Wu finds out they stole the tea and confronts them, Lloyd pulls out his sword, which Wu knocks it out quickly. After their quick brawl, Lloyd picks it up again and brings it with him to the Land Bounty.

Lloyd brings his sword to the old electronics warehouse to stop The Mechanic and his group from stealing the Prime Empire motherboard. Later, the ninja raid The Mechanic's headquarters, he has the weapon strapped to his back.

As the ninja examine the Prime Empire arcade cabinet, Lloyd has the sword with him while examining it.

He brings his sword with him as they try to rescue Cole in the Dungeons of Shintaro. 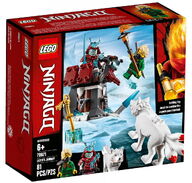 Set with it as a collectible 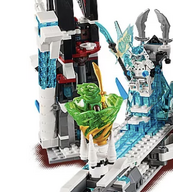 Lloyd's Golden Sword in the Castle of the Forsaken Emperor set. 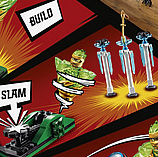 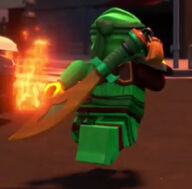