“Hit the road!”
— Lloyd to Emmet in "Enter the Ninjago"

Unknown
Lloyd Garmadon is the Green Ninja and a Master Builder.

As President Business began to erect walls between the realms, Lloyd and all the other Master Builders were forced to flee into tunnels constructed in the walls.

Once the Special was revealed, Lloyd gathered in Cloud Cuckoo Land with the other Master Builders though was captured when Bad Cop arrived. He was then taken to Lord Business' think tank and forced to come up with instructions.

Lloyd later helped the other Master Builders in the final showdown against Lord Business' forces.

In the president of Hollywood's' version of Emmet's story, Lloyd appeared during the highway chase and destroyed the robots so Emmet could getaway. Lloyd accompanied the president to Emmet's apartment where they showed off the new version to the master builder and when the president introduced Lloyd to Emmet, the Green Ninja in turn decorated the double-decker couch in an oriental design and sat next to him to mediate. When the president revealed that ninjas on their own had become outdated, Lloyd passed him the remote to show Emmet their new version of a scene; Lloyd swooping in on a skateboard to place the wheel on Emmet's head. Though Emmet reluctantly went along with it, he was surprised they had also changed the ending to have Lloyd cut him free from the battery. Emmet then suggested they just make a movie about Ninja, which the president of Hollywood immediately accepted.

In the movie, Lloyd wields two golden katanas and seems to be in possession of numerous smoke bombs. In "Enter the Ninjago," Lloyd displayed the ability of stealth and speed. 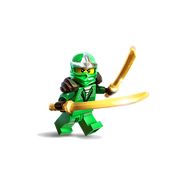