Ninjago Wiki
Register
Don't have an account?
Sign In
Advertisement
in: Ninjago, 2012, Rise of the Snakes, Ninjago: Masters of Spinjitzu

Lloyd Garmadon's Blog is a story through the eyes of Lloyd from the now-defunct LEGOClub.com website. It is slightly exaggerated, making Lloyd sound like a master villain. 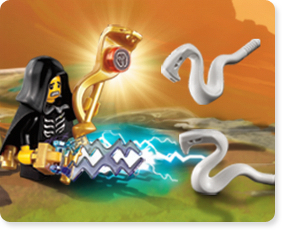 Today was almost the best day of my life. I was eating my breakfast when a package came from my grandmummy and it was filled with bright, sticky candy! At my boarding school for bad boys it's REALLY, REALLY hard to get any candy or fun toys because they're always busy teaching us how to pull tricks and take over the world and stuff. I was about to smush my face full of candy when that bully Finn saw me and his face had a big smirk on it. He got up from his seat at the next table over and grabbed the candy away, using his powers to turn it into crawly bugs and worms. 'Disgusting!' I yelled, 'HEYYY, MY CANDY!' He laughed, looking around at his friends, and then he pointed to his t-shirt that read 'Evil Geniuses Don't Cry.' Everyone was laughing. I had to get out of there before he decided to stick me in the trash bin again.

I hid in an empty classroom and thought of a plan. What was the word for that called? I have to try and remember all the words from my Villain Vocabulary List. Plotted, that's right. So I sat right there and plotted. I was going to leave Darkley's Boarding School for Bad Boys and never come back, AND I was going to get more candy. Everyone knows the first rule of any mission is to dress really scary, so I picked the lock on the teacher's closet and found an extra cape and a black helmet to wear. There were also some stuff the teachers took away from us, like a rubber band, rubber snakes, and a soccer ball. Rubber Snakes! That was it! They looked just like Serpentine. HISSS![1]

The best candy store is in Jamanakai Village, so of course I snagged a wheelbarrow and loaded it up. I got lollipops, gooey taffy, sugar straws, EVERYTHING! I threw the snakes at the villagers watching me. People hid and were scared. This is great, I thought, I’m going to have all the candy in Jamanakai and get a SUGARRRR HIGH! What would Finn think now, huh? Then those stupid Ninja had to show up, saying the snakes were fakes. They yelled at me for stealing. Before I knew it, people were throwing rotten vegetables at me, and those Ninja tied me up to a sign. This was just like Finn all over again. I felt a single tear fall on my cheek, but then I thought that Finn might be right about one thing – evil geniuses don’t cry! I am Lloyd Garmadon, son of Lord Garmadon and future ruler of the world!

I wandered through the Glacier Barrens to hide/plot. I was going to let those Ninjas see who they were dealing with. My luck turned around when I found this hatch that said Hypnobrai Serpentine on it with pictures of a snake using mind control. I was shocked…this looked like the real thing. I thought it was only a myth! I opened the door, and BOOM, fell down the hole. It looked like a snowy trap, and I could see millions of myself reflected in the ice. Just as I was thinking that I looked pretty scary, I saw a stranger – except he was just a frozen warrior dude, all bones. I started to shake. I wondered what happened down here... I’d rather be tied up by the Ninjas than end up frozen like him. All of a sudden I heard a rattling, and a bunch of TALKING SNAKES came out of nowhere! The leader tried to do a swirly thing with his eyes to control my mind, but I used my genius skills to move out of the way and deflect his stare, which bounced back at him. He was under mind control! I could make him and his army do anything I wanted! MUHAHAHA![2]