Ninjago Wiki
Register
Don't have an account?
Sign In
Advertisement
in: Ninjago, Events, Ninjago: Masters of Spinjitzu,
and 6 more
English

View source
“My story begins long ago. A time before the Long Winter. A time when our realm was still lush and green. A time… before I lost everything.”
— Akita to Lloyd, "The Last of the Formlings"

Around 60 years before the siege at the Monastery[1]

The Long Winter (also known as the rule of the Ice Emperor)[2] was an event orchestrated by the time-displaced, amnesiac Zane as the Ice Emperor and Vex. Together they overthrew Grimfax and his warriors and took control of the realm.

After Grimfax refused to help Vex, the latter wandered the wilderness struggling to survive. He witnessed a portal that spat out Zane, who had been banished into the past by Aspheera. Stalking Zane, Vex would be intrigued by the latter's power and usage of his scepter when repelling an Ice bird.

As Zane attempted to repair the Titan Mech, Vex attempted to steal his weapon but found he couldn't wield it. Having overheard, the risks of Zane prematurely interrupting the progression of his repairs, Vex pulled the mech's plug. This act erased Zane's memories, as Vex took advantage of this by convincing him that Zane is the Ice Emperor and Vex as his trusted advisor.

With Zane's help, they overthrow Grimfax and his Warriors and turned them into Blizzard Warriors with the use of his scepter. After that, Zane donned the Ice Emperor Armor and froze the Never-Realm, beginning the Long Winter.[3] Following Zane's takeover, Grimfax was demoted to the leader of the Blizzard Warriors and was the only Warrior that was never corrupted, just turned into one and coerced into serving Zane and Vex.

As the Ice Emperor, Zane

used his powers and his Scepter to create the rest of the Blizzard Samurai in which the Sword Masters and the Archers were created out of ice and snow. He also created an Ice Dragon, known as Boreal, which would obey his every command.

Freezing of the Village of the Formlings

The self-exiled Vex returns to his village just in time for the choosing of Akita and her brother Kataru. Many were surprised to see "Vex the Formless," while he expresses sarcastic pleasure to see them, as he calls them out on banishing him. However, the Formling Leader states he left of his own accord, and Vex angrily brings up their mockery before he tells the Formlings that he found an Elemental Power greater than the abilities of the Formlings. He requests they submit to him or he'll bring an army to eradicate them, but the leader stands his ground, and Vex retreats, promising them he'll back.

With his offer refused, Vex persuaded Ice Emperor to attack the Formlings' Village by lying to him of the Formlings being war-loving people. After obtaining her form, Akita returned just in time to watch as The Ice Emperor and Vex proceeded to freeze the Village of the Formlings. Attempting to stop them, Akita was knocked aside by the ice dragon Boreal who attempted to make her share the same fate as her people but Akita's brother intervened but ended up captured, leaving Akita and Kataru the only survivors.[4]

With her people frozen, Akita would leave and go on to swear revenge against Vex and the Ice Emperor. Unbeknownst to her, Kataru had survived and being taken to the Castle of Ice by Boreal as a prize. Unaware his sister survived, Kataru spent decades believing her dead and stayed trapped in the dungeon. However, when Kataru was offered by Vex to joined the Blizzard Samurai to spare Lloyd, a person who traveled to the Castle of Ice to rescue Zane (who thought he was the Blizzard Samurai's prisoner), he refused.

Shortly, after the Freezing of the Village of the Formlings, Zane decided to annihilate the Yeti for unknown reasons. All of them were annihilated, except for Krag.

As a result of the annihilation, Krag buried his friends and family in his cave where he isolated himself. Despite all of that, he still remains pretty friendly as he saved Cole and the Ice Fishers from different avalanches.[5] Cole later convinced Krag to join him and his friends in stopping the Ice Emperor and trying to find Zane, unaware of what happened to him.

An amnesiac Zane manipulated by Vex.

Zane (as the Ice Emperor) take his throne with Vex by his side.

Zane (as the Ice Emperor) and Vex watch the Village of the Formlings being frozen.

Kataru, a prize of the Village of the Formlings's freezing. 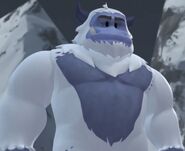 Krag, the last survivor of the Yeti.

The grave markers of the fallen Yeti. 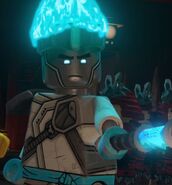