Ninjago Wiki
Register
Don't have an account?
Sign In
Advertisement
in: Ninjago, The LEGO Ninjago Movie, Villains,
and 5 more
English

The Lost Generals[1] are a group that make their debut in The LEGO Ninjago Movie. They're a group of Garmadon's former General #1's, all of which were both fired from their jobs and out of Garmadon's volcano and into the Canyon of General Unhappiness. The generals eventually started a colony in the canyon, building a village surrounding another volcano, so one day they could do to Garmadon what he did to them.

When Lord Garmadon was unsatisfied with his generals, he used to fire them from his volcano lair. However, he didn't know that his generals were creating a small colony in the woods.

All the generals still wear their Shark Army uniforms, the only differences being they're scorched and blackened from the sheer force of the blast from Garmadon's volcano, and the batteries on the oxygen tanks connected to their helments have run out.

The trauma from being fired out of a volcano and the stress of surviving in a deadly canyon has essentially caused the generals to lose their minds, devolving them to bloodthirsty monsters obsessed with exacting revenge on Garmadon. They exhibit the stereotypical behaviors of psychologically damaged people: bursting out in peals of laughter, moving in spastic ways, and making deranged faces.

Before Garmadon’s current General #1, there were a whole lot of other leaders of the Shark Army. All of them disappointed Garmardon in one way or the other, and wound up being launched from the volcano into the jungle. Now they are waiting there, singed and seething, waiting for a chance at revenge on Garmadon.[1] 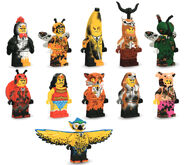