View source
watch 01:25
Jurassic World: Dominion Dominates Fandom Wikis - The Loop
Do you like this video?
Play Sound
“I was wrong. I shouldn't have pushed you so hard to follow in my footsteps. Everyone is born with a special talent inside that's just been waiting to get out. And you were born to be a ninja.”
— Lou to Cole, "The Royal Blacksmiths"

Singer
Member of The Royal Blacksmiths

Kirby Morrow
Jeppe Riddervold (singing; with The Royal Blacksmiths)
Lou is Cole's father, Lilly's husband, and a notable member of The Royal Blacksmiths, a famous song and dance troupe. He won the Blade Cup several times with his group and wished for Cole to follow in his footsteps.

On the Day of the Departed, Lou and the other Royal Blacksmiths performed in front of a large crowd in Ninjago City.

At some point, Lou and Lilly married and had a son named Cole, who inherited his mother's powers.

When Cole was young, Lou and Lilly often danced outside on the terrace of their house.[1]

When Cole was a child, Lou danced in the dance class with his wife Lilly while Cole watched them from behind the door.[2]

At some point after Lilly became ill, Lou took young Cole to the room where Lilly was and stood in the doorway as Cole talked to Lilly.[3]

At some point, Lou won multiple talent competitions against Dareth, who performed in a band called "Brown Suede Shoes."[4]

After Lilly's death, a rift formed between Lou and his son. Lou processed his grief through singing and dancing with his band.[5]

After Cole ran away from the Marty Oppenheimer School of Performing Arts, he kept in touch with his father through letters but lied that he was still attending the school.[6] Lou and Cole corresponded in letters up to the point where Cole was training with Wu in the Monastery of Spinjitzu.[7]

When the ninja discovered that the Constrictai Fangblade was now the Blade Cup, Cole decided to visit his father for the first time in years. Lou welcomed the ninja, being under the impression that Cole had formed a quartet to replace the Royal Blacksmiths in the annual Ninjago Talent, as he had suffered a sprained ankle that prevented him from performing. When the ninja were asked to display their dancing skills, Lou was less than impressed, correcting several flaws in their routine and warning them that the competition would be extremely stiff.

Later, Lou overheard Cole and his friends backstage, talking about stealing the Blade Cup. He angrily confronted his son about the deception, learning that Cole had run away from the Marty Oppenheimer School of Performing Arts at the age of seven, before storming off in a fury. The argument had a profound impact on Cole, who decided that his team would win the prize fairly, but with their own act.

Unbeknownst to Cole, Lou remained in the audience, hidden from the view of the stage. He watched the ninja perform their Spinjitzu and fend off the Serpentine's attempts to thwart their act, even witnessing Cole performing the Triple Tiger Sashay against a trio of Fangpyre. Amazed and impressed, Lou snuck backstage to meet Cole and the others after they won the Blade Cup, informing his son that he now realized the destiny laid out for them was not the destiny he had tried to force on him. In turn, Cole apologized for deceiving his father for so long, and the two reconciled.

Unfortunately, the happy moment was broken by Pythor, who ordered Bytar to drop stage supplies on Lou as a distraction to steal the Fangblade. Cole jumped over his father to shield him from the falling debris, unlocking his True Potential in the process. With his new powers, the Black Ninja lifted the fallen equipment off of himself and his father, although the Serpentine escaped with the Blade Cup.

Back at his house, Lou thanked Cole and his friends for their hard work, showing them a photo he took of them with the Blade Cup. He declared that all of them could consider themselves part of his family, and joined the ninja in a group hug.

Lou attended the "Take Back Ninjago!" rally, singing on stage with his fellow Royal Blacksmiths. He fled when the Great Devourer arrived in the city.

Lou and his quartet entered the Ninjaball Run competition on their stage bus, singing show tunes throughout the race. However, they crashed into a fallen tree shortly after entering Birchwood Forest, causing their truck to flip over and drop them into a snowbank.

While the ninja were saying their farewells at the harbor before setting off in search of the Island of Darkness, Cole spoke with Lou, who tried to express his pride in his son. Unable to find the right words, Lou decided to sing a song with his quartet instead—upon hearing it, Cole hugged his father and said that it was the sweetest thing he had ever heard. Lou joined the rest of the citizens in waving goodbye to the ninja as they left the harbor in the Destiny's Bounty.

Lou came by Dareth's dojo while the "Brown Ninja" and his students were beating up General Kozu. After the Stone General was hurled into the street, Lou noticed a gathering mass of dark clouds and wondered if it meant that the ninja had won. Unfortunately, it was just the opposite; the Overlord appeared in the middle of Ninjago City, behind the controls of the Garmatron and with the entire Stone Army behind him. Lou was caught in the barrage of Dark Matter fired from the Garmatron, corrupting him along with the rest of Ninjago City (save Dareth).

He was wandering the streets in a gloomy daze when the ninja returned to Ninjago City. After Lloyd defeated the Overlord once and for all, Lou was purified with the rest of the darkness-infected citizens.

Lou was asked by the ninja to aid in the battle against Chen and his forces. He helps in fighting off the fake Anacondrai long enough for Garmadon to banish himself to the Cursed Realm which releases the deceased Anacondrai generals who curse Chen and his army defeating them and sending to the realm.

On the Day of the Departed, Lou planned to meet with Cole to light a lantern together prior to the Royal Blacksmith's performance. However, Cole never showed up, prompting Lou to lead the Blacksmiths in a song expressing his sorrow. Yet before they could finish Lou and the others were quickly ushered onto the stage by Dareth, their new manager.

Later, Lou joined his son, the other ninja, and their families at the Temple of Airjitzu to tell stories before lighting a floating lantern to celebrate the holiday.

At an unknown point, Lou and his troupe were captured by the Vermillion warriors due to them mistaking their name "The Royal Blacksmiths" for actual blacksmiths. While held hostage, he met up with his son, who had snuck in to save the captives. Cole inquired as to why his father was captured before realizing the Vermillion needed armor and clothing forged with his father's troupe's name being mistaken as actual blacksmiths. With the efforts of Jay and Cole, Lou and the other prisoners manage to sneak out of their imprisonment.

Lou is a dark gray-haired man still in the prime of his life, with well-defined cheeks and small wrinkles near his eyes. He has bushy eyebrows like Cole, and also boasts a small mustache. He is usually seen wearing a brown suit, a white shirt, and a red bowtie, but he also owns a Royal Blacksmiths uniform, consisting of a tuxedo and a red bow.

In "Day of the Departed" and the Season 13 flashback, he has a slightly different hairstyle.

In his appearance on Lilly's necklace, the wrinkles on his eyes are gone and his mustache is slightly smaller, as well as his original hairstyle.

Day of the Departed suit

Day of the Departed suit (Helmet of Shadows' replica) 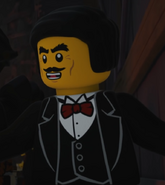 Lou with the Blade Cup

Lou with the ninja

A poster of Lou in Ultra Violet's cell.