Ninjago Wiki
Register
Don't have an account?
Sign In
Advertisement
in: Galleries needing organization, The Hands of Time, 2017,
and 16 more
English

View source
watch 01:25
Jurassic World: Dominion Dominates Fandom Wikis - The Loop
Do you like this video?
Play Sound
“Commander Machia, your initiative in capturing the ninja's Master impressed us. You are promoted to the rank of Supreme Commander of the Vermillion Army.”
— Acronix, "Secrets Discovered"

Kathleen Barr
Supreme Commander Machia (previously General) was a high-ranking Vermillion. She worked with Krux and Acronix and commanded the Vermillion for them, alongside Commanders Raggmunk and Blunck. She was loyal to them, but when their plan to use the Iron Doom became a reality, they reduced Machia to a pile of snakes, which slithered into the Iron Doom and were eventually lost in time with it.

After Machia told the Time Twins their plans, they went to kidnap Ninjago's citizens.

When Cyrus Borg won't help build the time apparatus, she was sent to make him do it. After Acronix found the Slow-Mo Time Blade's location, she informed the twins that the Army at the Mega Monster Amusement Park and Ed & Edna's Scrap N Junk can get to it before they can.

When the Vermillion failed, they told Machia about this.

Just when Cyrus was about cut a wire from the apparatus, and Machia stops him, threatening to hurt him otherwise. She suggested they use the BorgWatch to find where the ninja kept the Time Blade.

Arriving at the Temple, they started to attack the ninja.

On the way back to their base, Machia is promoted to the Supreme Commander of the Vermillion by Krux and Acronix. She would later threaten Cyrus Borg with the Slow-Mo Time Blade again for stalling in the construction of the Time Apparatus.

To make sure Cyrus doesn't sabotage the apparatus, Machia brought him with them and told the Vermillion to take it to the Iron Doom.

When they came back after collecting the Time Blade, Machia scolded Blunck and Raggmunk for losing Wu.

She later brought Wu to show Kai, Nya, and their parents, but Raggmunk and Blunck told them they had him the whole time.

When Ray took the Dragon Blade, Machia stole it back but was commanded to give it to them since they need it to get the Reversal Blade. When Kai and Nya returned, they fought and Krux accidentally slowed down Machia. They got the Blade and left them floating directly above the Boiling Sea.

When she got back, she saw the ninja trying to disable it and told the Vermillion to go to the Iron Doom.

Aboard the Iron Doom, Machia was ordered by Krux to ready her troops. Upon landing, Machia ordered her troops to fight the past Elemental Alliance, as well as ordering some of them to seize past Wu.

After Kai and Nya, who impersonate as their parents, reveal to the past alliance how to defeat the Vermillion, Krux, and Acronix then proceed to launch their failsafe plan, destroying Blunck, Raggmunk, and Machia back to their component snakes. Armed with Blunck and Raggmunk's helmets, the Time Twins call back all of their snakes, who proceed to be absorbed by the Iron Doom, bringing the mech to life and giving it the voices of Machia, Blunck, and Raggmunk combined.

Machia, along with all of the other Vermillion warriors giving the mech life, would become lost in time within the Iron Doom after Wu sabotages it while it was heading for the distant future.

With her Medusa-like hair, General Machia is one of three Vermillion commanders specially bred for the aggressive fighting style and strategic thinking. In fact, she is the MOST aggressive and MOST strategic, which is why she is promoted to Supreme Commander. Strong-willed and dominant, Machia is also smart enough to keep an eye on Cyrus Borg, using not-so-subtle threats to keep him from sabotaging the time-traveling apparatus he’s building.

Like the other commanders, Machia controls the Vermillion Warriors telepathically through a collective Hive Mind, but even a great general can outlive her usefulness. Krux and Acronix eventually smash her back into her component snakes so that they will be absorbed with the others into the mighty Iron Doom. Machia’s voice/identity becomes one of three commanders’ personalities that live on in the beast.[1]

Machia was one of the three commanders to Krux and Acronix. Machia proves to them time and time again that she is better than the other commanders. She is eventually promoted to Supreme Commander by the Twins but when the Twins time-travel to the Battle for All of Time, they "relieve" Machia of her job and she fuses with the Iron Doom.

She sees the duo as nothing more than fools who get in her way to the point that when they were struck by the Time Twins, she is rather happy and was waiting when the Time Twins would be done with their foolishness. 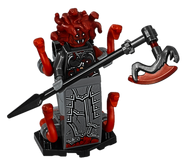 Machia with her tail

Machia in the siege against the Elemental Masters