Ninjago Wiki
Register
Don't have an account?
Sign In
Advertisement
in: Ninjago, Ninjago: Masters of Spinjitzu, 2021,
and 4 more

View source
watch 01:33
Wiki Targeted (Entertainment)
Do you like this video?
Play Sound
“
At the royal manta races, I'd place all my pearls on Undersea Biscuit.
— Trimaar in "The Tale of Benthomaar"
„

Unsinkable
71755 Temple of the Endless Sea

Alive
Manta rays are large rays that live in Merlopia. They are used by the Merlopians to ride through Merlopia and the rest of the Endless Sea.

Trimaar and Kalmaar use the rays when passing around a sunken ship, years later. Kalmaar and Benthomaar use them to venture the Tartarus Trench, though Bentho is knocked off of his.

When the ninja, P.I.X.A.L., and Maya were traveling to the Tartarus Trench, the manta rays attacked them by shooting the Hydro Bounty, causing it to sink.

Maraay Guards use the manta rays to surround and capture the ninja.

Kalmaar and his guards use them to chase the ninja throughout Merlopia.

Kalmaar uses a manta ray to escape and get to Ninjago City.

A manta ray was used by a Maaray Guard to throw Kai, Ray and Cole off Ninjago Harbor. Later on, the manta ray attached to Kalmaar's chariot was used to help Kalmaar escape with the Storm Amulet.

The manta rays are used by Maaray Guards to attack the ninja.

Maraay Guards use the manta rays to search for the ninja.

Some manta rays were seen in the palace's hangar bay when the Time Twins and Wu warped there. 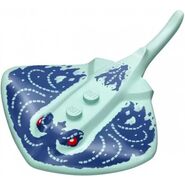