Ninjago Wiki
Register
Don't have an account?
Sign In
Advertisement
in: Ninjago, 2011, Ninjago: Masters of Spinjitzu,
and 2 more

Map of the Golden Weapons

View source
“And for fear of his own demise, a map for an honest man to hide. That honest man was your father.”
— Wu to Kai, "Way of the Ninja"

Map of the Golden Weapons

Way of the Ninja
2508 Blacksmith Shop

Intact
The map of the Golden Weapons is a map of Ninjago created by Master Wu detailing the exact locations where he hid the Golden Weapons. For fear that he might one day pass, Wu entrusted the care of the map to an honest man.

Shortly after Garmadon was banished to the Underworld, Wu hid the four Golden Weapons of Spinjitzu. Fearing he might die before the weapons were found again, he created a map detailing their locations and entrusted it to Ray. Ray hid it behind the sign of his blacksmith shop and it remained there in secret for around a decade.[1]

Samukai's forces eventually learned of the map and launched an attack on the blacksmith shop to retrieve it. Nuckal and Kruncha infiltrated the building and while fighting amongst themselves, managed to locate the map and claim it.

Samukai used the map to locate the Scythe of Quakes, hidden in the Caves of Despair. Despite often consulting it during the mining operations, the Skulkin leader was unaware that it was upside down and thus they were digging in the wrong area. The Map was eventually stolen by the ninja, who discovered the Skulkin General's mistake and located the Golden Weapon.

After retrieving the Shurikens of Ice, Wu showed the ninja on the map the location of the Nunchucks of Lightning. 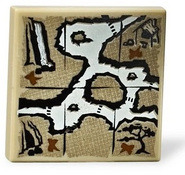 The map of the Golden Weapons in set form

The map created in Wu's story

The map hidden at the Four Weapons Blacksmith