To inspire Nya to become the Master of Water, Wu briefly summoned his Elemental Dragon to point out that it was a skill a samurai was unable to possess.

After Ronin stole the Sword of Sanctuary, Wu summoned his Elemental Dragon to pursue the thief escaping in R.E.X., only to find it empty.

Wu summoned his Elemental Dragon to destroy the cage he, Misako, and several villagers were trapped in.

Following the defeat of the Preeminent, Wu used his Elemental Dragon to scour the remains in search of Morro.

Many secrets remain about the true extent of Master Wu’s powers and abilities. Although he is not an Elemental Master, he has the willpower to be able to summon a dragon to aid him. While Wu is able to call upon this white and gold dragon, as the other ninja can theirs, there is evidence that Wu’s dragon can affect the physical world in ways that Elemental Dragons cannot. The true nature of this dragon remains a mystery.[1]

In a product animation 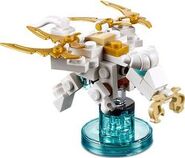 As seen as a vehicle in LEGO Dimensions

In the T.V. Series

Wu and Misako riding the dragon

Wu on his dragon, trying to save Morro.