Jillian Michaels
Maya is the former Elemental Master of Water, the wife of Ray, and the mother of Kai and Nya, the latter of whom would inherit her abilities. Maya fought alongside the other Elemental Masters and her husband in the Serpentine War. Eventually, the Serpentine were sealed away in various tombs. She sealed the Venomari away in the Toxic Bogs.

Following the War, Krux and Acronix, the two Elemental Masters of Time, betrayed the Elemental Alliance. Ray and Maya would fight the two along with the other masters, but they would fail to defeat them. However, Wu manages to get an idea and asks Ray and Maya to fulfill an important duty. With their skills of blacksmithing and their powers over Fire and Water, Ray and Maya managed to forge four blades out of Chronosteel, with the blades later becoming the Time Blades. After forging the final blade, the work completely exhausted them. Because of this, they didn't participate in the battle with Krux and Acronix at the Monastery of Spinjitzu.

After Wu and Garmadon managed to defeat Krux and Acronix and use the Time Blades to strip the two of their powers, they would lose the blades into a temporal vortex created by the blades, but Krux and Acronix would follow the blades, with Acronix being lost in time while Krux would remain in Ninjago, where he would ultimately start his forty-year plan for revenge. Between this time, Ray and Maya would have two kids, a son named Kai and a daughter named Nya, both of whom inherit the powers of their parents.

In the meantime, Krux would gain a false identity and work at the Ninjago Museum of History, where he would become Dr. Sander Saunders. Krux would befriend Ray and Maya until the day he revealed his identity, holding them at sword point. Saying that if they didn't work for him in creating vehicles, armor, and weapons for his army, Krux would harm Kai and Nya. With no other choice, the two were forced to work under Krux, residing in a blacksmith shop in the Vermillion Swamps, where he and his wife would create thousands of pieces of armor, vehicles, and weapons for the Vermillion. She would also design the outer shell of the Iron Doom, Krux's ultimate weapon.

Ray and his wife were reunited with their children, who learned their parents were forced to into servitude by Krux, who threaten to harm them should their parents disobey him. Ray and his wife made amends with their children, happy to see them after so long but they realized their children were in danger due to them possessing the powers to find the Time Blades, which the Time Twins exploited. Kai and Nya were now forced to help the Time Twins collect the Time blades otherwise they would harm their parents, though Maya and Ray told them to forget about them but were taken as hostages used as leverage to make sure the two ninja cooperated.

At one point of her life, Maya and Ray were handcuffed to a pole, and were able to get loose by climbing over the top.[1]

Maya later marched into battle with the alliance against the Anacondrai in Birchwood Forest, but due to Chen's manipulation, the Masters turned against each other and the battle was lost. Eventually, she helped win the war by using a Sacred Flute to lock the Venomari into a tomb in the Toxic Bogs.[2]

Maya later married Ray and had two children, Kai and Nya. The latter gained Maya's power of Water and was named after Nyad, the supposed first Elemental Master of Water, who Maya believed was just a myth. When Nya was small, Maya told her a story about Nyad.[3] Maya and her family lived in Ignacia, where they made a living at the Four Weapons Blacksmith.

They befriended a bumbling museum curator, Dr. Saunders, who later revealed himself to be Krux, who had managed to escape the time vortex. Maya and her husband were forcefully ordered by Krux to make weapons, vehicles, and armor for his Vermillion army, lest he harm Kai and Nya.[4]

Following an adventure on the Dark Island, Wu had a vision of Maya and her husband in the present, apparently being forced to forge something in a shadowy pit, which is later revealed to be working for Krux.[5]

Maya was able to get Kai to stop fighting Ray. Ray explained that since they made the Time Blades, Krux kidnapped them and forced them to work for them or he'll hurt Kai and Nya.

When Nya realized the pause they felt earlier may be the third Time Blade, Ray told them he and Maya hid the fourth one in the Boiling Sea and that only Fire and Water combined could get it. They realized the twins could force them to obtain it for them, but they couldn't leave on time.

Maya tells Kai and Nya that retrieving the Time Blade in the Boiling Sea would be difficult.

When they returned, the twins prevented them from saving Wu. They used the Pause Time Blade on them. They start to plummet into the Boiling Sea until Kai and Nya used the Fusion Dragon.

They arrive close to the Iron Doom, but since they need speed, she grabs Ray and they both jump off.

After Kai, Nya, and Wu followed the twins, Maya introduced Ray and herself as Kai and Nya's parents. There is nothing they can do but wait for their return.

Eventually, they start to notice the city has no technology and that Zane has gone back to his original state.

When technology returned, Ray was getting older. Maya helped support him and told the team that not everything is fixed. She was relieved when Kai and Nya came back and heal him.

After catching up with Kai and Nya, Ray and Maya went on a tour of Ninjago.[6]

Maya is called by Kai to come over to the Monastery of Spinjitzu, and she does along with her husband Ray. She embraces Nya and runs forward, asking Kai where Nya's room was.

Maya woke Nya up at 6:00 a.m. and tidied up her room. She also cooked her seaweed and tofu pancakes for breakfast. She then tried to teach Nya a water stance but failed to do so. Later on, as Kai and Ray are busy playing games, Maya brings a plate of ham, cheese and crispy bacon sandwiches.

When Nya asks to stay at the Monastery instead of going out to sea, Wu mentions that she would have to stay with Maya, leading her to go. Later, Maya sees them out.

Unbeknownst to the ninja, Maya sneaked onto the Hydro Bounty and did their chores. They realize it was Maya, with Nya realizing it first. Nya tried to make her leave, but Zane stated it would not be possible to turn around. Maya then states she would bake them muffins, with Jay and Lloyd relishing in joy.

Maya has a small chat with Nya, and Maya tries to convince her she is trying to help but to no avail. Maya then convinces Nya to let her use an APS suit. They then have another small chat before reaching the Temple of Wojira and entering it. They hide when they see Kalmaar's guards performing tests trying to awaken Wojira, but they are found out after a Storm Amulet replica does not work. They try to escape, but Maya is taken down first by Kalmaar.

Maya is chained with Nya and listens to Kalmaar. When he leaves, Maya tells Nya that she knows a way to escape the chains, and it works. They then are able to take off their shackles and enter the APS suits.

Maya's minifigure
Add a photo to this gallery

Maya, with Ray in the Hands of Time mural
Add a photo to this gallery 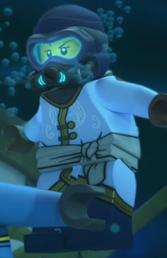 Scuba Mask
Add a photo to this gallery

Maya during the Serpentine War 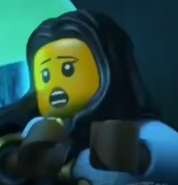 Retrieved from "https://ninjago.fandom.com/wiki/Maya?oldid=644059"
Community content is available under CC-BY-SA unless otherwise noted.